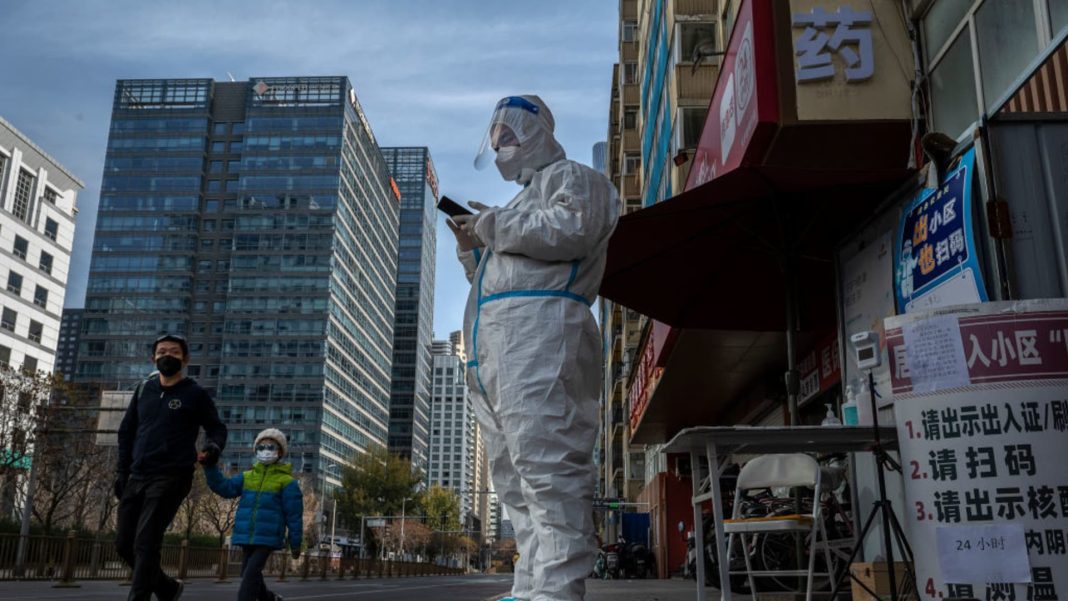 China’s capital city of Beijing is one of the hardest hit in the latest Covid wave. Pictured here is a health worker outside a locked down apartment complex on Nov. 27, 2022.

BEIJING — Mainland China reported the first decline in daily Covid infections in more than a week on Monday.

The country said local infections, mostly asymptomatic, totaled 38,421, down from a record high of 40,052 reported for Sunday, according to CNBC calculations of Wind Information data.

The last time the daily case count fell from the prior day was on Nov. 19, the data showed.

Local infections fell in Guangdong and Chongqing, two of the hardest-hit regions in the latest Covid wave. No new deaths were reported.

But the capital city of Beijing saw infections rise Monday from a day earlier, as did Shanghai, albeit at a far smaller scale. Shanghai Disneyland said it would suspend operations from Tuesday, after briefly reopening Friday. Universal Beijing Resort remains open.

There was no indication of new protests on Monday. Over the weekend, students and groups of people across China held public demonstrations to protest the country’s stringent zero-Covid policy.

Security has tightened in areas where protesters had gathered in Beijing and Shanghai, according to social media. Some social media reports said police were checking locals’ phones in Shanghai for foreign apps that can’t be accessed in the mainland without a VPN.

China’s official nightly news broadcast Monday did not mention the unrest, but included a segment calling for unity around the current Covid measures. The broadcast also emphasized how the government was maintaining health services and delivery of daily necessities to people in lockdown.

The purpose of the measures is to minimize Covid’s impact on the economy and society, claimed an op-ed Tuesday in People’s Daily, the Chinese Communist Party’s official newspaper. The article firmly ruled out the idea of relaxing controls.

Stringent Covid controls this year have weighed heavily on business activity and economic growth in China. As of the third quarter, national GDP had grown by 3% year-on-year, far below the official target of around 5.5% set in March.

As of Monday, 25.1% of China’s GDP was negatively affected by Covid controls, according to a Nomura model. That’s above the prior peak of 21.2% recorded in April during the lockdown in Shanghai.

“The rapid increase in public discontent over the lockdowns over the past weekend may further cloud the road to reopening,” Nomura analysts said.

They also said channels for going out to get medical treatment should remain unimpeded. Previously, anecdotes on social media described how people were denied access to medical care due to supposed Covid controls.

Covid measures and their implementation have varied locally, especially given the scattered nature of outbreaks.

Starting Tuesday, the city of Shanghai tightened restrictions on entering restaurants, shopping malls and other commercial venues. Anyone wanting to enter must now present a negative virus test from within the last 48 hours, down from 72 hours.

And in the wake of the protests, at least Tsinghua University has encouraged students to return home early for the Lunar New Year winter break — more than a month ahead of time.

Disclosure: Comcast is the owner of NBCUniversal, parent company of CNBC.