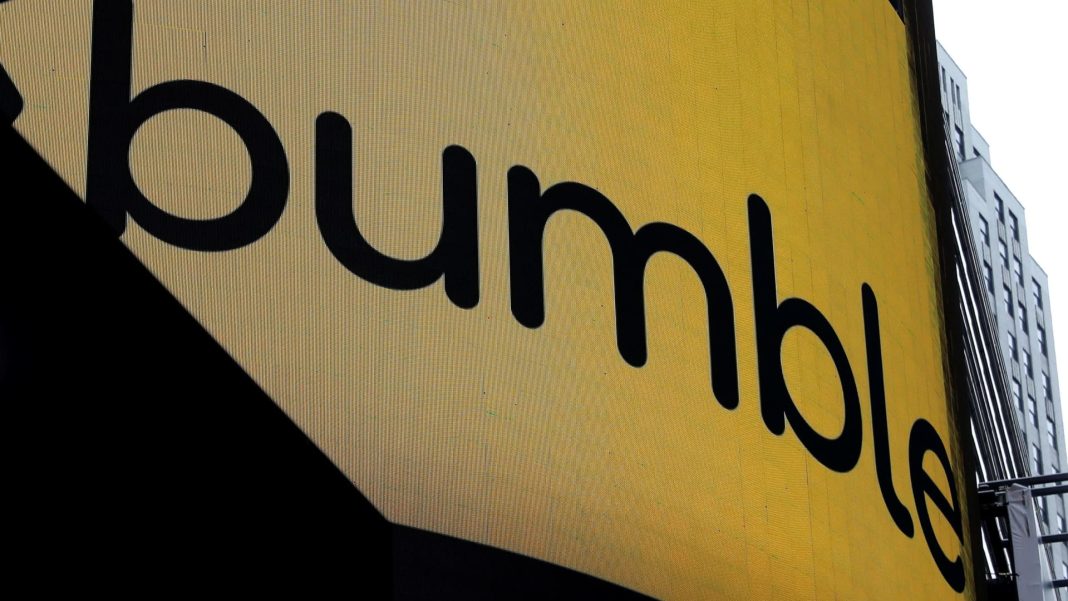 The display outside the Nasdaq MarketSite is pictured as the dating app operator Bumble Inc. (BMBL) made its debut on the Nasdaq stock exchange during the company’s IPO in New York City, New York, U.S., February 11, 2021.

Check out the companies making headlines in after-hour trading.

Bumble – The dating app company plummeted 15% after it reported third-quarter revenue below Wall Street’s expectations, according to StreetAccount. Bumble said fourth-quarter revenue and adjusted earnings before interest, taxes, depreciation, and amortization would likely come in under expectations due to headwinds from foreign currency and the war between Russia and Ukraine. Competitor Match Group slid 1%.

FICO – Shares of the analytics company jumped 10% after it beat StreetAccount’s expectation for per-share earnings and revenue when reporting fourth-quarter earnings after the bell. The company also said it expects to beat estimates on both for the full year.

Rivian – Shares of the electric vehicle maker gained 5% after the company reported a smaller per-share loss than expected by analysts polled by Refinitiv. Revenue came in below expectations. The company reaffirmed its full-year production guidance.

ZipRecruiter – The stock popped nearly 15% after the job marketplace beat StreetAccount’s estimates for third-quarter per-share earnings and revenue. The company also raised its full-year guidance and said its board has authorized a $200 million increase to its share repurchasing program.

Beyond Meat – The plant-based food maker known for its meat alternatives shed nearly 1% following its third-quarter earnings report that showed it posted a wider-than-expected loss, according to StreetAccount. Revenue was slightly higher than anticipated. For the fiscal year, the company reiterated prior net revenue estimates. Beyond Meat also noted it will incur a one-time charge of about $4 million related to the decision made last month to lay off 19% of its workforce.

Dutch Bros – Shares of the coffee chain added 5% after Dutch Bros posted beats on the top and bottom lines, according to Refinitiv.

Canoo – The stock added 3.4% after the electric vehicle company posted smaller per-share earnings and adjusted EBITDA losses than expected, according to StreetAccount.