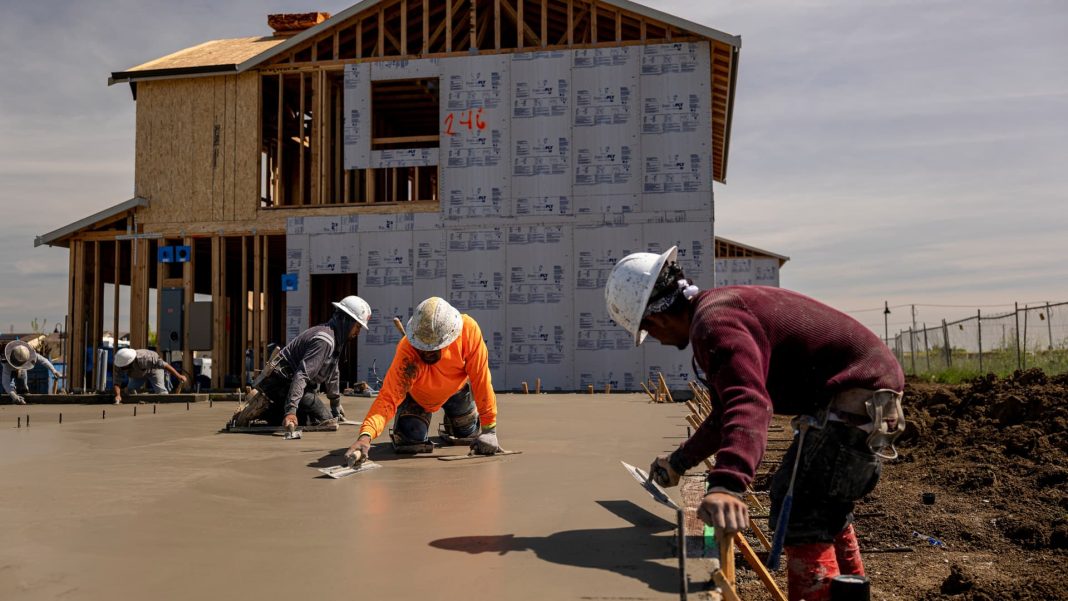 Contractors work on concrete slabs in the Cielo at Sand Creek by Century Communities housing development in Antioch, California, on Thursday, March 31, 2022.

Homebuilder sentiment in the single-family housing market fell to the lowest level in a decade in November, as builders continue to struggle with higher costs for labor and materials and lower demand from homebuyers.

A monthly sentiment index from the National Association of Home Builders dropped 5 points from October to 33. That is the eleventh straight monthly decline and the lowest level since June 2012, with the exception of a very brief drop at the start of the Covid-19 pandemic that was followed by a strong rebound.

A year ago, builder sentiment stood at 83.

Of the index’s three components, current sales conditions fell 6 points to 39, and sales expectations for the next six months dropped 4 points to 31. Buyer traffic fell 5 points to 20.

In the face of mortgage rates that are more than twice what they were at the start of this year, builders are having to offer potential buyers better deals. The NAHB said 59% of builders reported using incentives, a significant increase from September to November.

In November, 25% of builders reported paying points for buyers, up from 13% in September. Mortgage rate buydowns rose to 27% from 19% during that same time.

In addition 37% of builders cut prices in November, up from 26% in September, with an average price of reduction of 6%. However, the price cuts are only about half of what builders offered in 2008 during the housing crash and Great Recession.

“Even as home prices moderate, building costs, labor and materials − particularly for concrete − have yet to follow,” said Robert Dietz, NAHB’s chief economist.

Regionally, on a three-month moving average, builder sentiment in the Northeast fell 6 points to 41. In the Midwest, it slipped 2 points to 38. In the South, it fell 7 points to 42 and declined 5 points to 29 in the West.