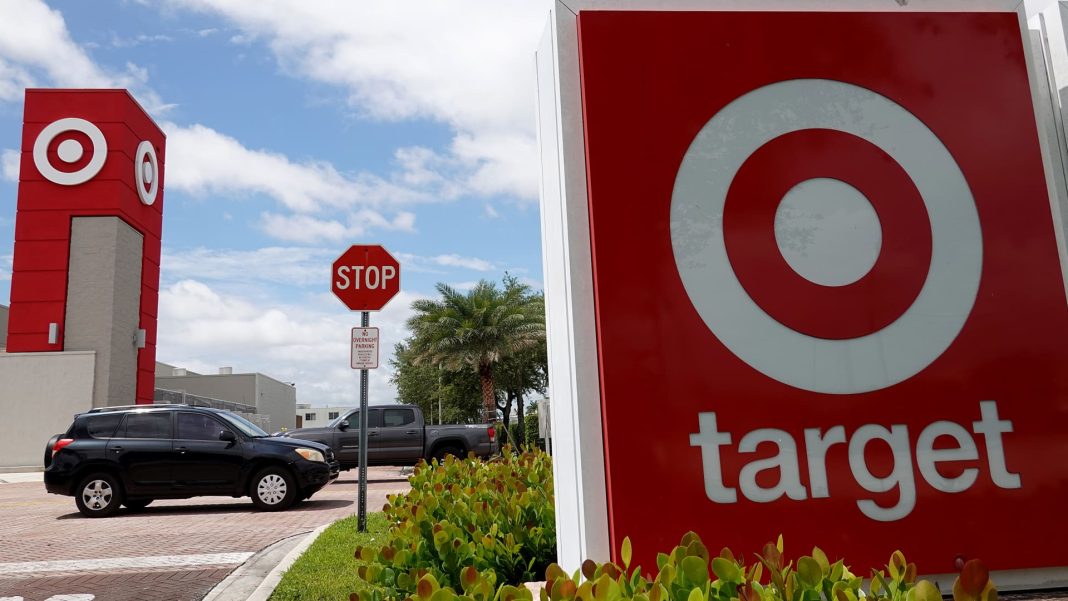 A sign outside of a Target department store on June 07, 2022 in Miami, Florida. Target announced that it expects profits will take a short-term hit, as it marks down unwanted items, cancels orders and takes aggressive steps to get rid of extra inventory.

Target on Wednesday will report its fiscal third-quarter earnings, as the big-box retailer tries to clear through an abundance of extra inventory and woo holiday shoppers.

Here’s what Wall Street is expecting, according to Refinitiv:

Target’s inventory was up 43% year over year in the first quarter and 36% in the second quarter. The retailer cut its outlook twice, first in May and then in June, saying it would take a hit to profits as it cancelled orders and aggressively marked down TVs, small kitchen appliances and more to make space for fresh merchandise for the back-to-school and holiday season.

This summer, the company also said it would stock up more on high-frequency categories like food and essentials, as Americans pulled back in other areas like home and apparel.

Those actions hurt the company in the second quarter, with profits falling nearly 90%. Yet Chief Financial Officer Michael Fiddelke said the moves would position the company for a stronger back half of the year.

Target competitor Walmart beat Wall Street’s expectations on Tuesday, saying low-priced groceries are drawing customers across income levels. The company also showed improvement with its own inventory woes, saying inventory is up only 13% year over year — with most of that coming from inflation.

Target, however, sells a different mix of merchandise. Only 20% of its annual sales come from grocery compared with Walmart, which gets nearly 56% from the category, according to the two companies’ most recent annual reports.

Target is better known for launching and growing trendy, but low-priced private label brands, such as activewear brand All in Motion, and Hearth & Hand, a home brand created with TV stars Chip and Joanna Gaines. Yet sales in those categories have cooled, as inflation runs hot and consumers spend on travel and other services again.