Target under pressure, hopes value-hungry shoppers come to the rescue 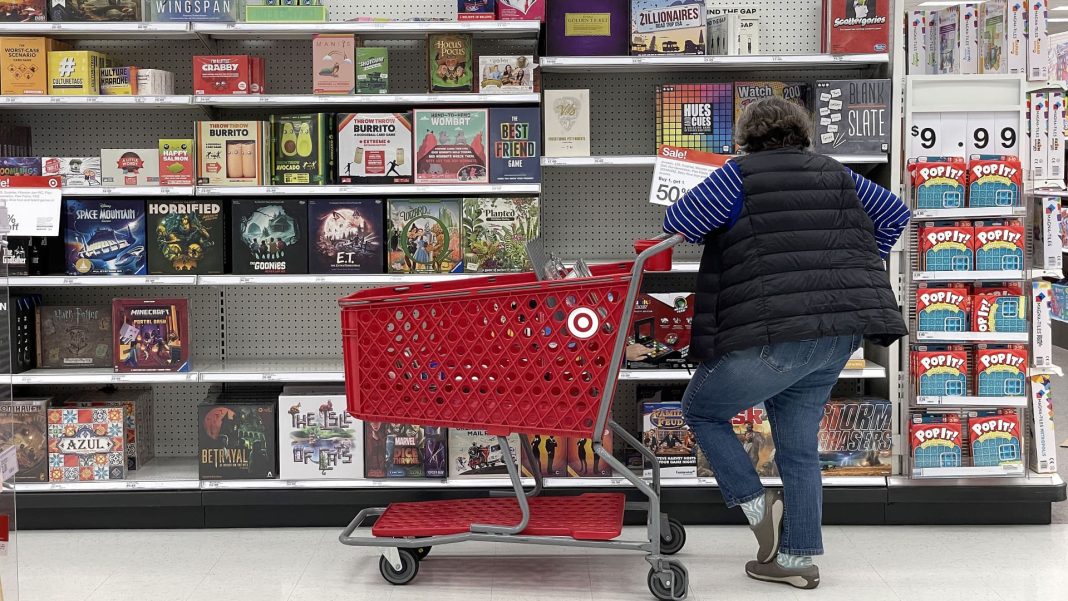 Target is stressing value this holiday season, as consumers feel pinched by inflation. At its store in New Jersey, signs that advertise low-priced items are more prominent than in previous years.

FAIRFIELD, N.J. — Inside of this large store in the suburbs, Target is trying to create some holiday magic for shoppers.

The big-box retailer is looking for some of its own magic, too. The holiday shopping period has become higher stakes for Target, after it put up disappointing earnings results for three quarters and cut its forecast for the current one. Excess inventory has dragged down the company’s profits, as sales have slowed.

Target is competing in an environment where retailers must work harder to get inflation-weary consumers to spend. Its huge Covid pandemic gains are at risk as middle- and upper-income shoppers spend money on other expenses, such as commuting, vacations, and sending kids to piano lessons and soccer camp. Many already replenished their closets and sprung for big-ticket items like flat-screen TVs, leaving fewer items on the wish list. And even wealthier households are turning to discounters like Walmart, which are known for cheaper groceries.

Other retailers are under pressure, too. Kohl’s, Under Armour and Gap are all navigating the season while looking for new CEOs. Bed Bath & Beyond is trying to revive its business, as it shrinks its store footprint and workforce. Nearly every retailer is trying to get inventory in a cleaner position, while juggling both unwanted goods and more price-sensitive shoppers.

But Target is by far the biggest company of these, with a market value of around $66 billion, and it has a lot on the line. Shares of Target has fallen more than 37% so far this year. That stock slump came after Target in May missed fiscal first-quarter earnings and in June warned it would take a hit to profits as it marked down merchandise.

Target has more than 1,700 toys that are exclusive to its stores and website this holiday season. It also has a deal to sell items from storied toy brand FAO Schwarz.

Target is also trying to cut through the noise of a more promotional holiday season. The big-box player, which has a reputation for cheap chic, has struck exclusive deals with brands and created its own fresh merchandise.

One of those deals is with storied toy brand FAO Schwarz. Another is with Marks & Spencer, a British retailer, which created a line of specialty food items like shortbread cookies in a tin shaped like a London bus and tea bags in a collectible lantern.

Store associates will rotate displays and ends of aisles to feature unique items, including make-your-own gingerbread house kits and beauty gift sets. She said the goal is to be a “holiday happy place” where shoppers want to stay awhile and fill up their carts.

In the parking lot, Target recently added Starbucks orders to its curbside pickup option, Drive Up. Along with picking up online purchases, shoppers can also get a coffee without leaving the car. It began rolling out the option at 240 stores just ahead of the holidays — with plans to add it to more stores soon.

For customers who have a full calendar of holiday outings and events, it has more mini Ulta Beauty shops inside of its stores, with special holiday gift sets, fragrances, makeup staples and some giftable items for $5 or $10. There are 350 of the shops — up from around 100 a year ago.

A hard problem to shake

But Target doesn’t have the same edge it did during the early years of the pandemic — a time when it stayed open as an essential retailer, became an alternative to the shopping mall and benefited from customers who were flush with stimulus cash.

Weekly store traffic at Target is down when compared on both a year-over-year basis and when compared with pre-pandemic store traffic in 2019, according to data from Placer.ai, which tracks retail foot traffic. It was down 6.1% year over year and down 4.7% versus 2019 for the week of Dec. 5, the most recent data available.

That downward trend has cut across other retailers, including Walmart, Macy’s and Best Buy. It does not capture whether shoppers are spending more or less than previous years.

Michael Baker, a retail analyst at D.A. Davidson, said Target is still haunted by a strategic error — making a big bet on discretionary goods at the wrong time.

Only about 20% of Target’s annual sales come from groceries, according to company filings. Most sales come from apparel, home goods and other discretionary merchandise — the very items that aren’t selling like they did before.

Target wound up with too much of that merchandise, as supply chain clogs eased and inflation soared. It announced an aggressive plan to clear through the glut. Yet on its third-quarter earnings call in November, it shared a new challenge: A sharp slowdown in sales in late October and early November.

“If things got worse from there, it raises the question of what’s going on with Target,” he said.

With so much uncertainty, between inflation and the possibility of a recession, Target’s Sylvester said she doesn’t expect the broader economy to be so “rosy” in the coming year. So, she said, Target will keep emphasizing.

During the Fairfield store visit, Sylvester said Target can win with its wide merchandise mix. Shoppers can come for groceries. They can buy inexpensive workout gear from Target’s own brand, All in Motion, as they make New Year’s resolutions. And they can choose from more products in a historically recession-proof category — beauty — as Ulta shops open at more stores, she said.

“How do we double down and bring sort of the joy and the magic of Target to our guests who are going to need it even more?” she said. “Affordable joy shouldn’t just be a holiday thing. That’s all year round.”