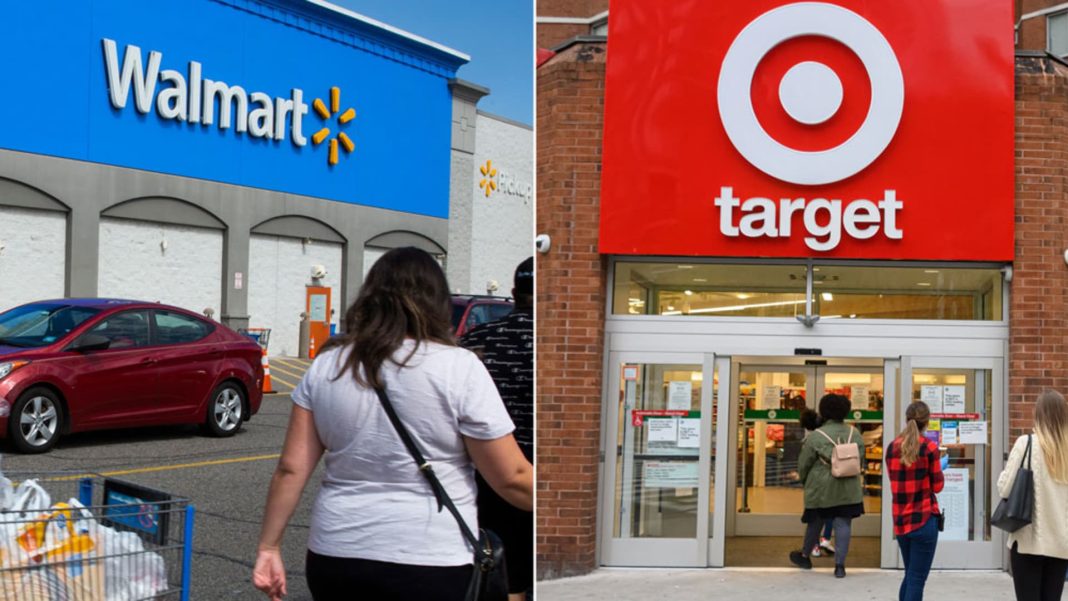 The rival big-box players are both known for selling an array of products including food, clothing, home goods and kitchen appliances. Both their CEOs — Walmart’s Doug McMillon and Target’s Brian Cornell — stepped into their roles in 2014.

But the retailers issued starkly divergent outlooks this week that underscored their differences, most notably in how much each relies on grocery sales.

On Tuesday, Walmart raised its financial outlook for the year after U.S. same-store sales in the third quarter rose 8.2% from a year ago when excluding fuel. A day later, Target slashed its forecast for the holiday quarter after comparable sales rose just 2.7%, with executives noting weakening trends heading into the season.

Here’s a rundown of four key factors that help explain the split in the earnings results:

Walmart gets a far bigger share of its sales from groceries than Target, which is helping it draw shoppers looking to save money as inflation squeezes budgets.

Groceries account for 56% of Walmart’s annual revenue, compared with about 20% at Target, according to company filings. Walmart is the country’s largest grocer by revenue.

Target also sells groceries, but it doesn’t have the same breadth of offerings. For example, stores sell eggs, milk, fruits and vegetables, but do not have full-service bakeries, meat and seafood counters or delis where shoppers can get freshly sliced turkey and cheese.

By contrast, shoppers tend to go to Target more for “top-up shopping” — grabbing a few food items when making a run for another reason, such as picking up diapers.

Even as shoppers decide not to buy a TV or new outfit, they have had to keep replenishing the food in their fridges — a factor that is keeping Walmart’s sales steadier.

A man pushes his shopping cart past bread for sale at a Walmart SuperCenter store in Rosemead, California.

Walmart is known for its mantra of “everyday low prices” and its focus on value has become synonymous with its name. Founder Sam Walton built the company on a no-frills approach aimed at making groceries and other products more affordable.

As Americans increasingly watch their budgets, the big-box retailer’s reputation as a discounter is giving it an edge. And the company has flexed its ability to use its size and scale to keep prices low.

Walmart’s McMillon speaks often about the company being a price leader — and more recently, an inflation fighter. For Thanksgiving, the company said it would hold down the price of foods like turkey and ready-to-heat macaroni and cheese to last year’s levels.

For the past two quarters, the company said about 75% of its market share gains in food have come from households with an annual income of more than $100,000 a year.

Target has turned its stores into mini malls offering a range of “cheap chic” items.

It has launched exclusive private brands, such as All in Motion, a trendy, but lower-priced activewear brand and Hearth & Hand, a home decor line created with celebrity home renovation duo Chip & Joanna Gaines.

It also has shops for popular national brands, including Disney, Ulta Beauty and Apple. And it has a Starbucks where shoppers can grab a latte to sip on as they browse.

The assortment has led to jokes about “Target runs,” where shoppers stop by for toothpaste, but end up leaving with a lot more.

About 21% of sales at Target come from unplanned purchases, according to GlobalData research from before the pandemic. At Walmart, the figure is about 12%.

In an inflationary environment, those shopping sprees – and impulse buys – become a tougher sell.

“People are starting to say ‘Do I actually need this?'” Saunders of GlobalData said. “When people do that, that affects Target more so than Walmart.”

Both retailers draw shoppers from across incomes, but Target’s customers tend to be wealthier.

During the pandemic, Target benefitted from its middle-income customers, who suddenly felt flush with cash from stimulus checks and the money they weren’t spending on dining out, travel or sending kids to summer camp.

Those shopper helped Target’s sales grow dramatically during the pandemic. Its annual revenue rose about 36% to $106 billion in 2021, the most recent full fiscal year, from 2019.

And even in a third-quarter that disappointed Wall Street, its sales continued to climb 3% to $26.52 billion from a year earlier.

The growth is being fueled in part by investments Target made before the pandemic — such as renovating stores, adding curbside pickup and turning stores in fulfillment centers for online orders.

But now as people go back to traveling, dining out and commuting into the office, Target is competing with more spending priorities. It has also gotten tougher for the company to keep topping its own growth.

“It’s picked a lot of that low handing fruit,” Saunders said. “Now even if there wasn’t this consumer crunch, it would have been much more difficult to eke out gains.”