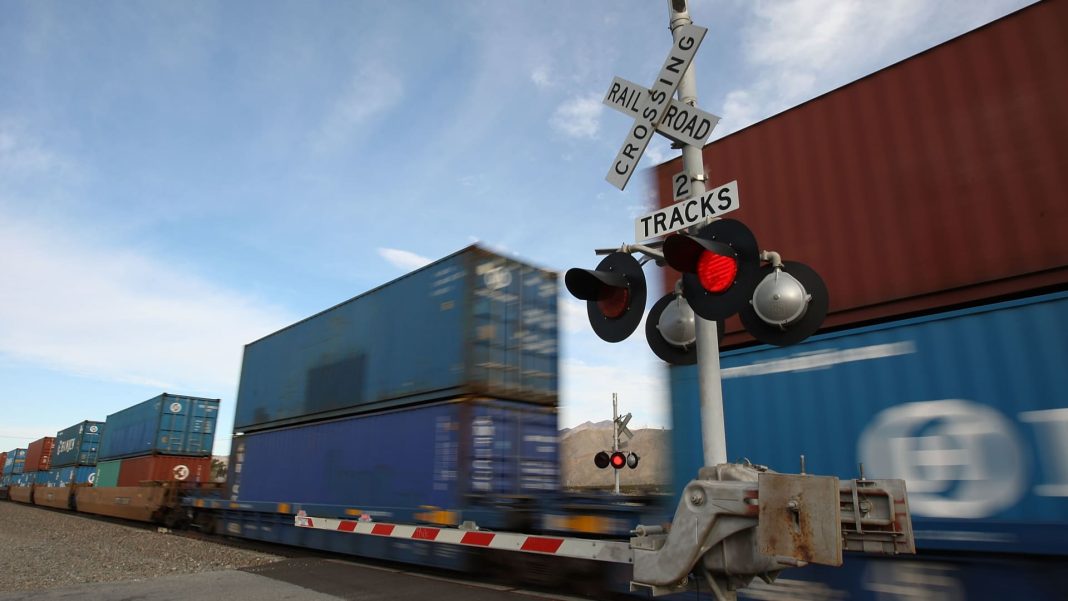 A Union Pacific freight train carries goods east near Palm Springs, California, a key link in the roadways and railways that connect the southern California metropolitan areas, as well as the busiest port complex in the nation, with the rest of the U.S.

Union Pacific is pausing the use of embargoes on its freight network, a practice that had increased significantly this year and led the Surface Transportation Board to call Union Pacific CEO Lance Fritz and other of the rail’s top executives to a hearing in Washington, D.C., earlier this week.

In a letter addressed to STB chairman Martin Oberman and sent to the STB on Friday by Fritz, the Union Pacific CEO stated, “We are taking a hard look at our use of congestion-related embargoes. To facilitate that hard look, we are immediately pausing any additional embargoes under the pipeline inventory management program we began in November.”

According to STB data, the railroad’s use of embargoes to control congestion increased from a total of five in 2017 to more than 1,000 to date in 2022. Reports that the embargoes are hampering shippers’ operations and adding to supply chain problems for the national economy were among reasons that led STB to call the hearing.

Union Pacific carries nearly 27% of freight served by rail and nearly 11% of all long-distance freight volume.

The railroad has contended that due to its geographic span, number of yards, customer facilities, and commodity mix that embargoes are one of the few tools it has to manage and meter customer-controlled railcar inventory levels and alleviate network congestion. It has also referred to embargoes as a tool of “last resort.”

The STB has been vocal about its frustrations with Union Pacific, stating ahead of the Dec. 13-14 hearings that Union Pacific “failed to provide any detail” in response to an order from the STB to explain a “dramatic increase in embargoes since 2017,” including whether UP has maintained sufficient resources during that time period.

The STB has been interested in how UP’s staffing and service levels have impacted the supply chain and if a lack of labor is part of the reason behind the embargoes. Unions have said that even as major freight rail companies add workers, the data supplied to STB on hiring is masking a longer-term trend of labor attrition. A labor lawyer who testified at this week’s hearing said that the class I freight rails may be hiring, but they are not retaining existing workers so there is no net gain.

“Instead, they are lengthening trains to sizes that exceed infrastructure capacity which is adding to the congestion, instead of adding workers to improve the service,” said Richard Edelman, one of the attorneys representing the rail unions.

A CNBC review of the Union Pacific labor data supplied to the STB and starting January 2019 through October details the history of labor attrition, a timeframe that includes the combination of the deployment of the company’s precision railroading strategy called, Unified Plan 2020, which was launched in October 2018 and rolled out in phases across the entire Union Pacific rail network. The impact of the Covid pandemic can also be seen in the drop in labor.

Union membership data shows employment on all of the Class I rails, including Union Pacific, is down from just before the start of the pandemic and even down between October 2021 and October 2022.