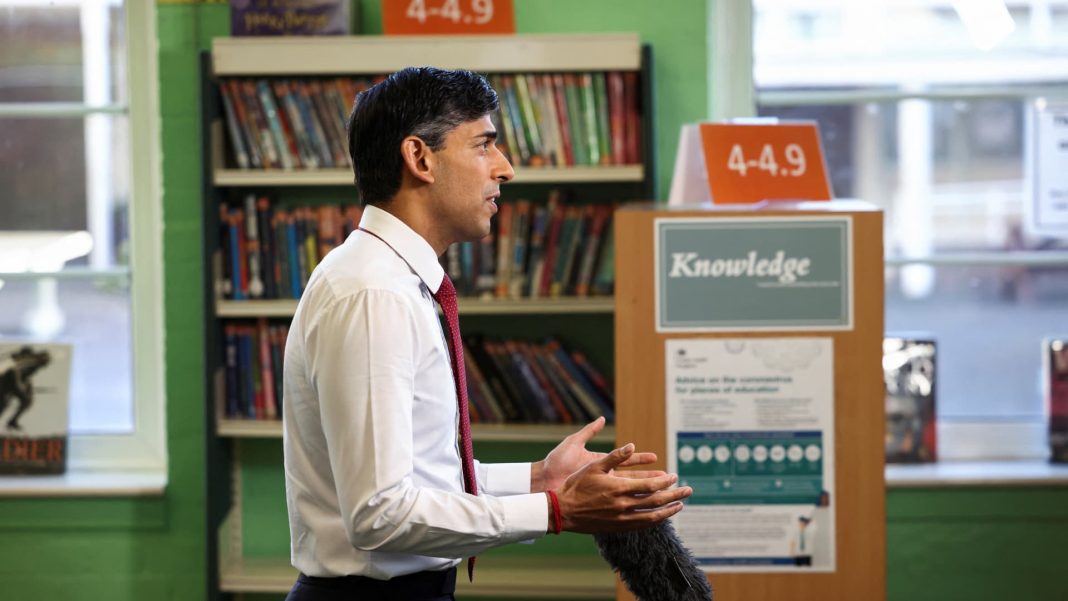 LONDON — U.K. Prime Minister Rishi Sunak is preparing to meet union leaders this week for what he hopes will be “constructive” talks as he seeks to halt nationwide industrial action, even as his government prepares controversial anti-strike legislation.

Tens of thousands of workers have walked out across industries in recent months to demand better working conditions and pay raises in line with inflation, which is still running at double digits in the U.K.

U.K. inflation slowed to 10.7% annually in November from a 41-year high of 11.1% in October, and the country’s independent Office for Budget Responsibility projects that British households are set to experience their sharpest fall in living standards on record.

Sunak told reporters during a visit to a London school on Friday that he is seeking a “grown up, honest conversation with union leaders about what is responsible, what is reasonable and what is affordable for our country when it comes to pay,” according to Reuters.

His comments came just a day after his government announced new anti-strike laws in a bid to “enforce minimum service levels” across key public services, including the National Health Service, schools, rail networks, nuclear commissioning and the fire service.

The legislation, which Sunak’s government plans to introduce in Parliament within the next few weeks, would allow bosses to sue unions for disruption and sack employees who participated in industrial action.

The full details of the plan may be laid out as soon as Thursday, according to The Times newspaper, but the initial announcement was met with outrage by union leaders.

The Royal College of Nursing (RCN), which has been undertaking the first strike action in its 106-year history in recent weeks, called the move “undemocratic,” while the general secretary of the Fire Brigades Union (FBU) said the entire trade union movement would “fight this pernicious attack on workers by all means available.”

Over the weekend, Sunak softened his tone further on the nurses’ strikes, telling the BBC that he is open to talks over a new pay deal that is “responsible” and “affordable,” with further walkouts in NHS workplaces across England slated for Jan. 18 and 19.

On the same BBC show, RCN General Secretary Pat Cullen called Sunak’s shift a “chink of optimism” and urged the prime minister to meet her “halfway.”

Talks between the government and union leaders are scheduled for Monday, but Unite, one of the country’s largest unions which also represents NHS members including ambulance workers, accused Sunak of “misleading the British public” over pay negotiations.

Unite General Secretary Sharon Graham, in a statement Sunday, reiterated that no progress on the upcoming (2023/4) NHS pay review could be made while the current 2022 NHS pay claim remains unresolved.

“I have repeatedly called for the prime minister to come to the table on this. All the general secretaries representing NHS workers stand ready to negotiate with him at any time,” Graham said.

“But this meeting on Monday has been misrepresented on almost every level. It is not a negotiation, it is not on current NHS pay and it is not with the prime minister.”

Graham added that unless Sunak “accepts the need to make real progress on the current pay claim, there will still be strikes across the NHS this winter.”

A total of 2,600 Unite ambulance workers are set to strike on Jan. 23 with further action in Wales on Jan. 19.

The NHS is facing an unprecedented crisis, with hospitals full, patients lying in corridors and ambulances queueing outside emergency departments unable to offload patients or respond to new calls. Health trusts and ambulance services around the country have declared “critical incidents” in recent weeks as services are overrun.

Sunak held an emergency meeting with health leaders over the weekend and told them that “bold and radical” action would be needed to guide the NHS through the crisis.

National rail networks have also been heavily disrupted by strikes over the past four weeks, with the latest 48-hour walkout by members of the Rail, Maritime and Transport Workers union resulting in only around one in five trains across Great Britain running on Saturday.