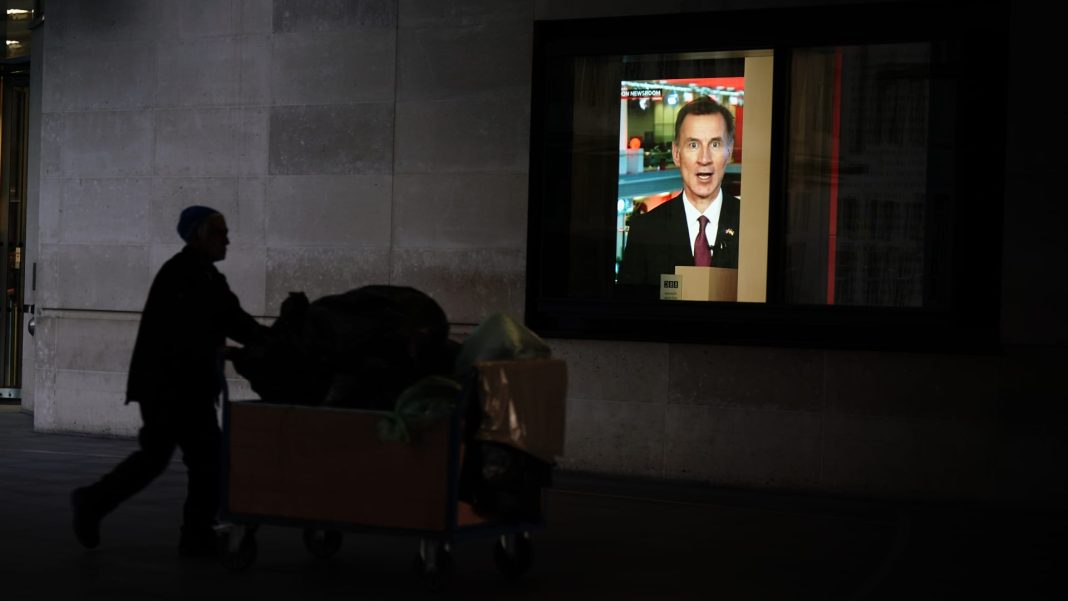 A man wheels a trolley past a screen displaying Chancellor of the Exchequer Jeremy Hunt being interviewed by the BBC the morning after his autumn statement, outside the BBC studios in central London.

LONDON — U.K. growth has lagged the world’s biggest economies since the Covid-19 pandemic and is substantially below the OECD average, according to a new report from the influential Paris-based group.

U.K. gross domestic product has contracted by 0.4% between the fourth quarter of 2019 and the third quarter of 2022, versus cumulative 3.7% growth in the 38-member Organisation for Economic Co-operation and Development.

In the G-7 nations — which includes Canada, France, Germany, Italy, Japan, the U.S. and U.K. — GDP has grown by a cumulative 2.5%, with only the U.K. recording a decline.

“We think this is happening mostly because of investment and because of consumption,” Alvaro Pereira, the OECD’s chief economist, told CNBC’s Joumanna Bercetche on Tuesday.

“Knowing the U.K. faces a difficult fiscal situation, that’s why we welcome what the government has done in the latest statement,” he said.

Last week, Finance Minister Jeremy Hunt announced around £30 billion in spending cuts and £25 billion in tax hikes for workers and businesses in what he said was a bid to rebuild public finances, limit 41-year-high inflation and restore economic credibility after the market-rocking September budget.

“We think that it is very important to maintain fiscal prudence at the same time that you’re able to boost or try to introduce some kinds of reforms to address some of the issues that have been plaguing the United Kingdom for a while, which is very low productivity,” Pereira continued.

“I think it’s time to focus on that as well as monetary and fiscal policy.”

Pereira added that the OECD’s forecast for the U.K. economy’s magnitude of growth between 2022 and 2024 was similar to the independent Office for Budget Responsibility, but it expected a shallower 0.4% recession next year followed but 0.2% growth the year after, while the U.K.’s OBR forecasts a deeper recession and a stronger rebound.

Former Bank of England policymaker Michael Saunders this week told CNBC Hunt’s plan had a “massive” hole where an economic growth strategy should be.

‘Light at the end of the tunnel’

This cautioned that the global economy is set to slow in the year ahead due to the energy market shock caused by the Russian invasion of Ukraine and amid sky-high inflation, low consumer confidence and global risks.

OECD Secretary-General Mathias Cormann said in broadcast remarks the “world is facing substantial headwinds and substantial risks over the horizon” and “countries also need to take bold steps to address some of the longer-term challenges to lay the foundation for a stronger and more resilient economy.”

This included structural reforms such as increasing childcare support and flexible working options to encourage more women into the workplace, creating incentives to boost investment in low-emissions technology, and keeping international borders open to trade to alleviate supply-side inflationary pressures.

Pereira told CNBC: “We are facing a very challenging environment. I think one of the most dramatic pictures we have in our outlook is exactly how much countries are spending in terms of energy as a percentage of GDP, and you can see that right now for OECD countries it’s close to 18% … which is as high as we’ve seen in the oil crisis in the 70s and 80s.”

“We are facing a very large energy shock right now which is lowering growth, at the same time that it’s fueling inflation.”

The primary downside risks were within energy markets, particularly next year in Europe and Asia if there are two cold winters and retail prices follow wholesale prices higher, he said. The OECD is also concerned about financial market volatility for low-income countries and emerging markets that have high debt burdens amid rising rates.

However, he reiterated the OECD did not forecast an annual recession, even in major economies such as the U.S. and the euro zone.

He also said central bank action on monetary policy would begin to take effect to tame inflation, and that the latest U.S. inflation print was “fairly positive.”

“We expect that not only the U.S. but other parts of the world, the decisiveness of monetary policy will start to have more and more of an impact. Our central forecast sees inflation peaking in many countries in the mid half of next year or late this year, but mostly next year,” Pereira said.

“Particularly in 2024 we start having inflation rates much closer to target, so there is some light at the end of the tunnel, but we need not to let go of monetary and fiscal tightening working hand in hand.”