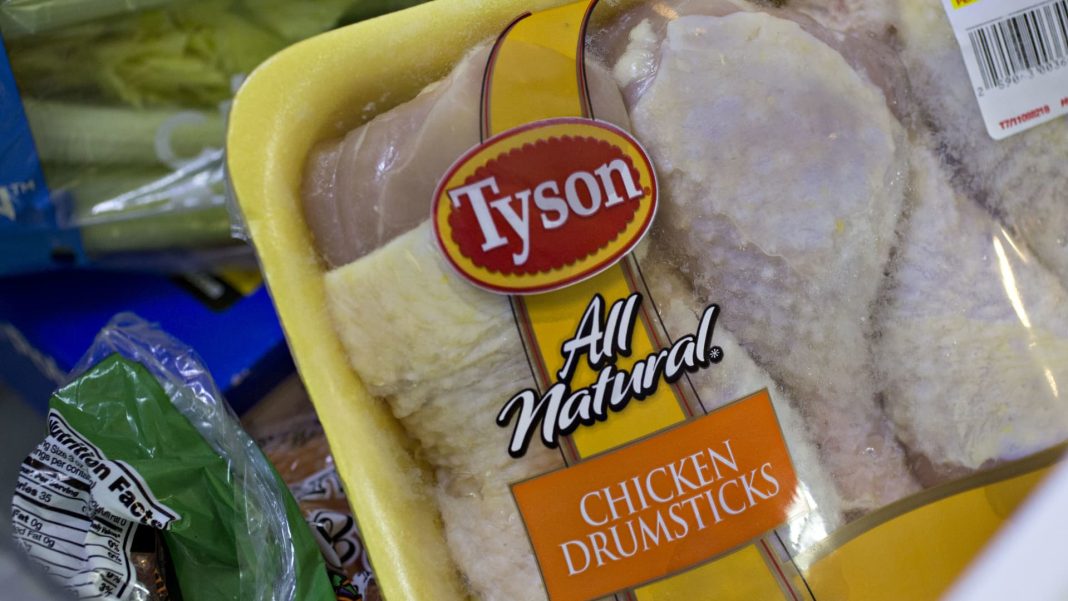 A package of Tyson Foods Inc. chicken is arranged for a photograph in Tiskilwa, Illinois.

Tyson Foods hit a 52-week low on Friday in a third-straight down day, a sign that investors are losing confidence in the company amid growing margin pressure and operational issues this year.

Investment firm Piper Sandler said late Wednesday it was growing “more cautious” on the company as recent months have seen a squeeze on the company’s margins due to the higher costs of cattle-raising and lower retail prices for meat.

Deflating prices of beef and chicken in recent months coupled with rising feeding costs have put broader pressure on the livestock industry.

Staffing shortages and chick-hatching problems have made it difficult for Tyson to keep up with orders, according to a Wall Street Journal report in July. Tyson did not immediately respond to a request for comment.

Piper Sandler projected a three-year average earnings decline of 3.9% from 2023 to 2025. The firm maintains a “hold” rating on the stock with a price target of $68 per share.

Tyson’s tumble extends a downswing for the stock in the second half of the year.

The company posted a strong first quarter with sales rising over 23% to nearly $13 billion, exceeding the company’s own expectations and almost doubling profits.

But Piper Sandler downgraded Tyson shares in May, warning budget-conscious consumers would look for cheaper meat brands as inflation drove up prices.

Though meats, poultry, fish and egg prices were down month over month in November, according to the consumer price index inflation report, the categories are still up nearly 7% over last year.

Barclays and Argus Research also downgraded Tyson this year, citing similar concerns. At least seven major Wall Street firms have “hold” or “sell” ratings on the stock, according to research compiled by FactSet.

Share
Facebook
Twitter
Pinterest
WhatsApp
Previous article
Omicron boosters keep seniors out of hospital, CDC says
Next article
We're adding to an oil stock and see 3 other names as good buys in a down market
- Advertisement -