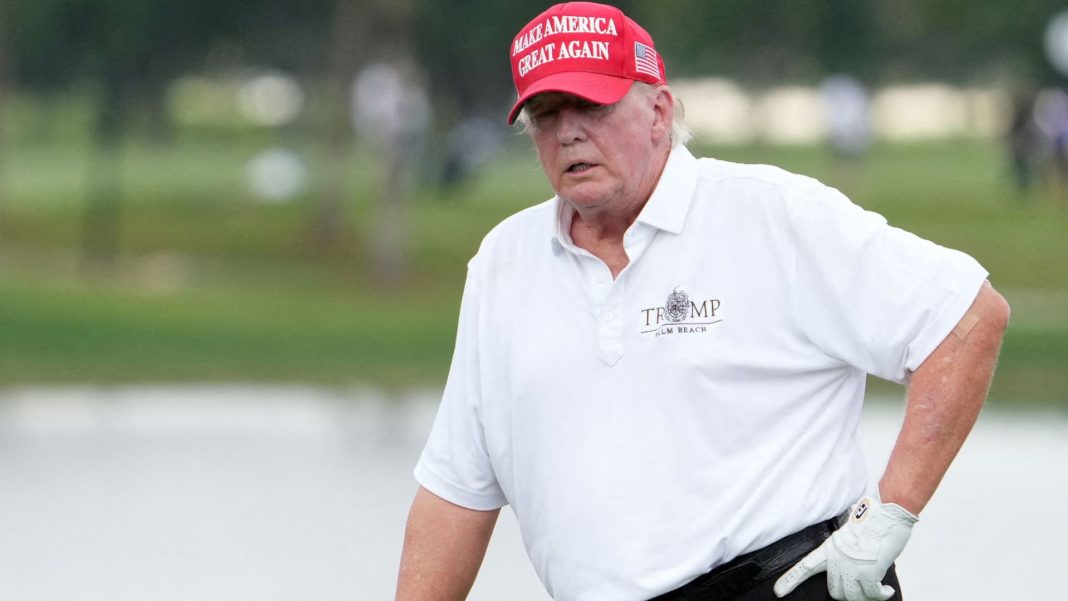 Former President Donald Trump stands on the 18th green during the Pro-Am tournament before the LIV Golf series at Trump National Doral, Oct. 27, 2022.

Former President Donald Trump on Friday morning voluntarily dropped a longshot federal lawsuit in Florida against New York’s attorney general — a day after the same judge in the case sanctioned him and his lawyer nearly $1 million for filing another, “frivolous” lawsuit against Hillary Clinton and many other defendants.

The judge, John Middlebrooks, had pointedly noted in a scathing sanction order Thursday evening in the Clinton case that he was also handling Trump’s complaint against Attorney General Letitia James in U.S. District Court for the Southern District of Florida.

Trump’s suit against James — which Middlebrooks last month warned appeared “vexatious and frivolous” — was filed in reaction to her own civil lawsuit against Trump in New York state court alleging fraud at his company.

James’ spokeswoman, Delaney Kempner, noted that Trump’s dismissal of his lawsuit came on the same day that his “reply to our motion to dismiss this case was due.”

In the Clinton case, Middlebrooks ordered Trump, who is seeking the 2024 GOP presidential nomination, and his lawyer Alina Habba to pay Clinton and other defendants around $938,0000 for filing the suit, which the judge previously dismissed.

Trump’s suit accused Clinton and the others, including the Democratic National Committee and various FBI officials, of conspiring to create a false narrative during the 2016 presidential election that his campaign was colluding with Russia.

“We are confronted with a lawsuit that should never have been filed, which was completely frivolous, both factually and legally, and which was brought in bad faith for an improper purpose,” Middlebrooks wrote in his order dunning Trump and Habba with monetary sanctions.

New York Attorney General Letitia James pauses during a press conference at the Office of the Attorney General in New York on May 9, 2022, to make an announcement about protecting access to abortion.

Middlebrooks’ order cited how Trump has responded in court in New York to James’ years-long civil investigation of his company, the Trump Organization, as one of the multiple examples of “a pattern of abuse of the courts” by the Republican former president.

“Mr. Trump is a prolific and sophisticated litigant who is repeatedly using the courts to seek revenge on political adversaries,” the judge wrote.

“He is the mastermind of strategic abuse of the judicial process, and he cannot be seen as a litigant blindly following the advice of a lawyer.”

James in September filed suit in Manhattan Supreme Court against Trump, his company, three of his adult children, and others, alleging widespread fraud involving false financial statements related to the company’s business.

In November, Trump sued James in Florida state court, alleging she was engaged in a “war of intimidation and harassment” against him. That suit sought to block James from getting records from a revocable trust he set up in Florida that has ownership of the Trump Organization.

James shortly thereafter removed that lawsuit to federal court in Florida, where Middelbrooks was assigned the case.

Middlebrooks in his order in the Clinton case Thursday noted that last month he had ruled that Trump’s “attempt to sidestep rulings by the New York court by suing AG James individually rather than in her official capacity was plainly frivolous.”

The judge also had found that Trump had ‘no likelihood of success on the merits” of the case,” and that he had urged Trump to consider dropping his opposition to James’s bid to get the case.

“This litigation [against James] has all the telltale signs of being both vexatious and frivolous,” Middlebrooks had written last month.

But the judge later wrote, “a decision in Mr. Trump’s Florida lawsuit against the New York Attorney General, a case now pending before me, is premature.”

A lawyer for Trump did not immediately respond to a question about why the lawsuit against James was voluntarily dismissed.