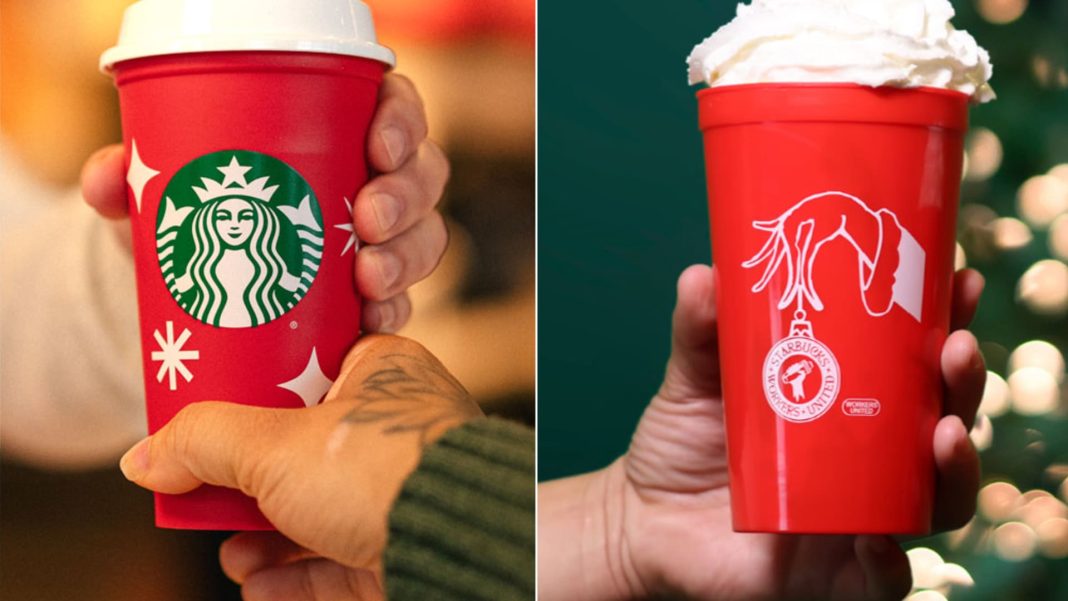 Workers at more than 100 unionized Starbucks locations plan to strike on Thursday, one of the chain’s biggest sales days of the year.

To celebrate the holiday season, Starbucks every year gives away reusable red cups bearing the company’s logo with any purchase. The giveaway on the coffee chain’s Red Cup Day has become a must-have for collectors, and this year’s event marks its 25th anniversary.

On Thursday, organizers at 113 striking locations are planning to protest and distribute a version of the red cup featuring the Grinch’s hand holding an ornament with the logo of the Starbucks union.  The actions are expected to affect store operations for at least part of the day.

It’s the largest collective action Starbucks Workers United has taken so far in its organizing push over the past year.

The union said the strike is meant to call attention to the company’s alleged union busting and refusal to negotiate contracts fairly. Starbucks has denied all allegations of unfair labor practices.

Over the past 12 months, roughly 260 company-owned Starbucks locations have voted to unionize under Workers United, an affiliate of Service Employees International Union. That’s a small fraction of the chain’s nearly 9,000 company-operated locations in the U.S., but the union push has made a splash and inspired similar actions by workers at Trader Joe’s and Chipotle Mexican Grill.

The number of new cafes that have filed for union elections has slowed in recent months, but if a contract agreement were to occur it could give the movement a boost.

In late September, Starbucks sent letters to more than 200 locations saying that it was ready to start contract negotiations. But Starbucks Workers United contend the company hasn’t been bargaining in good faith.

Talks between the two sides broke down quickly due to disagreements over whether union members can join the talks via Zoom. Representatives from Starbucks have walked out of meetings minutes after they begin, insisting on only face-to-face negotiations, citing federal regulations.

“Broadcasting or recording these in-person sessions is deeply concerning and undermines the interests of our partners because negotiations may warrant the discussion of individuals by name and are likely to address a range of sensitive topics,” Starbucks said on a blog post on its anti-union website.

The company has filed 22 complaints tied to negotiations with the National Labor Relations Board.

On Tuesday, the federal labor board filed for an injunction, asking that a court order the company to stop firing workers nationwide.