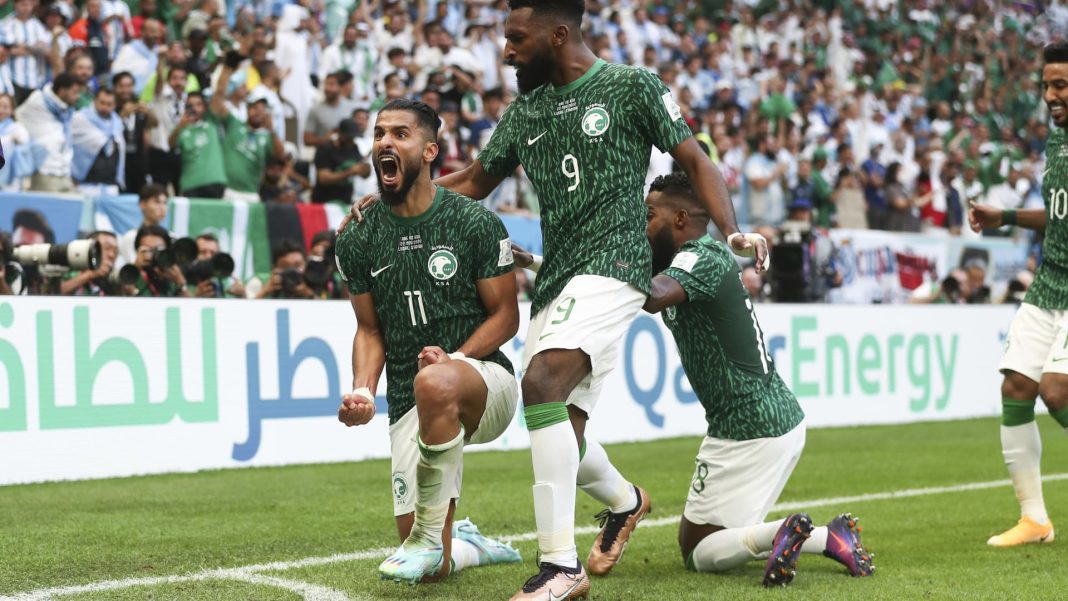 Saleh Al-Shehri of Saudi Arabia celebrates with his team mates after scoring a goal to make it 1-1 during the FIFA World Cup Qatar 2022 Group C match between Argentina and Saudi Arabia at Lusail Stadium on November 22, 2022 in Lusail City, Qatar.

Saudi Arabia produced one of the greatest upsets in World Cup history as Salem Al-Dawsari’s stunning solo effort secured a 2-1 victory over Argentina in Group C at the Lusail Iconic Stadium.

Time stood still as Al-Dawsari plucked the ball out from the sky and turned inside two Argentina defenders before curling his finish beyond the reach of Aston Villa defender Emiliano Martinez, producing one of the biggest moments of any World Cup finals.

Lionel Messi had given one of the pre-tournament favourites the lead from the penalty spot after a contentious VAR decision (10) but Saleh Al-Shehri levelled just three minutes into the second period to set up an almighty upset.

The result ended Argentina’s 36-game unbeaten run, stretching back to defeat against Brazil three years ago but this was the greatest day in Saudi Arabian football history.

“This hurts a lot. We were dreaming of starting the World Cup with a win,” said Messi’s strike partner Lautaro Martinez. “But it’s happened and now we have to train and think forward.

“We lost this game because of our own mistakes, most of all in the second half. There are details that make a difference and we need to correct our mistakes.”

When Argentina last lost their opening World Cup group game in 1990 – against Cameroon – they went on to reach the final where they lost to Germany, but that will be of little consolation to the South Americans right now following defeat to the nation ranked 51st in world football.