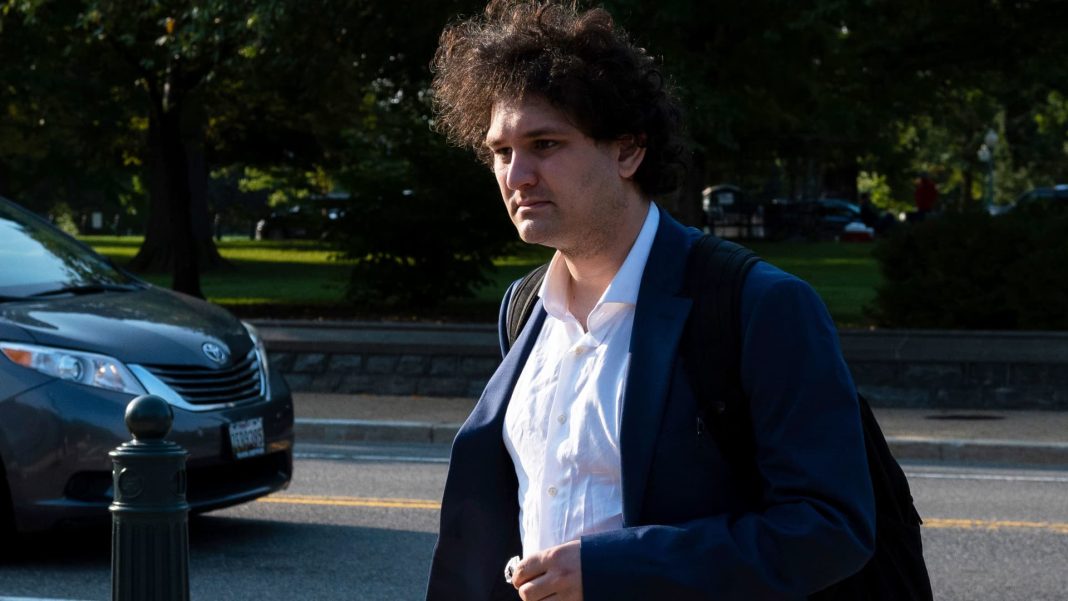 NASSAU, Bahamas — Despite being pushed out of the cryptocurrency giant he founded, Sam Bankman-Fried told CNBC he is trying to lock down a multibillion-dollar deal to bail out FTX, which filed for Chapter 11 bankruptcy protection earlier this month.

In a brief interview with CNBC late Friday, the FTX founder declined to give details about the downfall of his crypto conglomerate, or what he knew beyond liabilities being “billions of dollars larger than I thought.” Bankman-Fried declined an on-camera interview or broader discussion on the record. He said he was focused on retrieving customer funds and is still on a quest to secure a deal.

“I think we should be trying to get as much value to users as possible. I hate what happened and deeply wish that I had been more careful,” Bankman-Fried told CNBC.

Bankman-Fried also maintained that there are “billions” of dollars in customer assets in jurisdictions “where there were segregated balances,” including in the U.S., and said “there are billions of dollars of potential funding opportunities out there” to make customers whole.

What was once a $32 billion global empire has imploded in recent weeks. Rival Binance had signed a letter of intent to buy FTX’s international business as it faced a liquidity crunch. But its team decided the exchange was beyond saving, with one Binance executive describing the balance sheet as if “a bomb went off.” FTX filed for Chapter 11 bankruptcy protection on Nov. 11 and appointed John Ray III as the new CEO, whose corporate experience includes restructuring Enron in the wake of its historic collapse.

Despite losing access to his corporate email and all company systems, Bankman-Fried maintains that he can play a role in the next steps. Venture capital investors have told CNBC the 30-year-old had been calling to try and secure funding in recent weeks. Still, investors said they couldn’t imagine any firm with a large enough balance sheet or risk appetite to bail out the beleaguered FTX.

A long-shot, Bankman-Fried-brokered deal would be viewed in the same way as any competitive bailout offer, according to legal experts.

“He’s no different than any third-party suitor at this point, other than the fact that he’s a majority FTX shareholder,” said Adam Levitin, a Georgetown University law professor and principal at Gordian Crypto Advisors. “He could come into Delaware with an unsolicited offer, and say I want to buy out all the creditors for a price. But that would have to be approved by the bankruptcy court — he can’t force a deal.”

FTX’s new CEO has also said he’s open to a bailout. On Saturday, Ray said the crypto company is looking to sell or restructure its global empire.

“Based on our review over the past week, we are pleased to learn that many regulated or licensed subsidiaries of FTX, within and outside of the United States, have solvent balance sheets, responsible management and valuable franchises,” FTX chief Ray, said in a statement, adding it is “a priority” in the coming weeks to “explore sales, recapitalizations or other strategic transactions.”

After reviewing the state of FTX’s finances last week, Ray said he’s never seen “such a complete failure of corporate controls and such a complete absence of trustworthy financial information” in his 40-year career. He added that Bankman-Fried and the top executives were “a very small group of inexperienced, unsophisticated and potentially compromised individuals,” calling the situation “unprecedented.”

Battle in the Bahamas

Part of Bankman-Fried’s ability to ink a deal may come down to which jurisdiction has more say in the bankruptcy process.

In a recent filing, FTX’s new CEO Ray cited a conversation with a Vox reporter last week in which Bankman-Fried suggested that customers would be in a better position if “we” can “win a jurisdictional battle versus Delaware.” He also told Vox he “regrets” filing for Chapter 11 bankruptcy, which took any FTX restructuring out of his control, adding “f-k regulators.”

Billions in FTX customer assets are now caught in limbo between a bankruptcy court in Delaware, and liquidation in the Bahamas.

John Ray put FTX and more than 100 subsidiaries under Chapter 11 bankruptcy protection in Delaware — but that didn’t include FTX Digital Markets, which is based in the Bahamas. The Nassau-based leg of FTX doesn’t own or control any other entities, according to the organizational chart filed by Ray.

The Bahamas Securities Commission hired its own liquidators to oversee the recovery of assets and is backing a Chapter 15 process in New York, which gives foreign representatives recognition in U.S. proceedings. As part of that process, Bahamas regulators said they transferred customers’ cryptocurrency to another account to “protect” creditors and clients. It also claimed the U.S. Chapter 11 bankruptcy process doesn’t apply to them.

The Bahamas move flies in the face of what’s happening in Delaware.

The FTX estate claimed that those withdrawals were “unauthorized” and accused the Bahamas government of working with Bankman-Fried on that transfer. FTX’s new leadership team has challenged Bahamian liquidators, and asked the U.S. court to intervene while enforcing an automatic stay — a standard feature of Chapter 11 proceedings. Typically, bankruptcy is meant to fence off assets to make sure they can’t be touched without court approval.

FTX’s team claimed the Bahamian group had no right to move money and called the Bahamas withdrawals “unauthorized.” Data firm Elliptic estimated the value of the transfer, which was initially thought to be a hack, to be around $477 million.

“There are some issues that require either coordination or fighting to figure out — there’s going to be some jockeying when it comes to assets in the Bahamas vs. the U.S.,” said Daniel Besikof, partner at Loeb & Loeb. “The Bahamas folks are taking a broader read of their mandate and the U.S. is taking a more technical read.”

The bankruptcy mayhem is partly a result of messy accounting on the part of FTX. Under Bankman-Fried’s leadership, John Ray said the company “did not maintain centralized control of its cash” — “there was no accurate list of bank accounts and signatories” — and “an insufficient attention to the creditworthiness of banking partners.”

Part of the Bahamas’ motivation for control may come down to economic interests. FTX hosted a high-profile finance conference with SALT in Nassau and planned to invest $60 million in a new headquarters that one top executive likened to Google or Apple’s campus in Silicon Valley.

“Some of it is about protecting domestic creditors — this is a Bahamas company. There’s also a lot of money to be made for local Bahamian law firms, you have the whole trickle down effect,” said Georgetown’s Levitin. “There’s going to be some level of a staring contest between the Delaware bankruptcy court and the Bahamas regulator.”

Some experts say Bankman-Fried may be gunning for a bailout to reduce his own criminal liability and possible jail time. Bankman-Fried did not respond to a request for comment on potential charges.

Justin Danilewitz, a partner at Saul Ewing who focuses on white-collar crime, said while the odds of anyone flocking to make FTX whole are “highly unlikely given the staggering losses,” mitigating client losses can be a tactic to look better in the eyes of the court.

“That’s often highly advisable if a defendant is in a real pickle and the proof is compelling — it’s a good idea to try and make amends as promptly as possible,” Danilewitz said.

Some have likened that outcome to what happened at MF Global, formerly run by New Jersey ex-Governor Jon Corzine. The company was accused of using customer money to pay bills for the firm. But Corzine settled with the CFTC for $5 million, without admitting or denying misconduct.

The approach could backfire, Danilewitz said. That move could “reflect a degree of culpability or be viewed as an admission, and someone taking responsibility for what happened.”

Even if Bankman-Fried manages to play a role in recovering funds through a bailout, or somehow gain more control through a Bahamas liquidation process, he may face years of legal fights from possible wire fraud to civil litigation.

Wire fraud requires proof that a defendant engaged in a scheme to defraud, and used interstate wires to achieve that. The statutory maximum term is a 20-year max term sentence, in addition to fines. Danilewitz called it a “federal prosecutor’s favorite tool in the toolbox.” The key question, he said, will have to do with the defendant’s intent. “Was this all a big mishap, or was there intentional misconduct that could give rise to federal criminal liability?”

Others have likened Bankman-Fried’s legal situation to Bernie Madoff and Elizabeth Holmes, the latter of whom on Friday was sentenced to 11 years in prison for fraud after deceiving investors about the purported efficacy of her company’s blood-testing technology.

“The Theranos verdict should not have left him feeling good,” said Georgetown’s Levitin. “He has a real risk here. There’s the possibility of criminal liability, and civil liability.”

Share
Facebook
Twitter
Pinterest
WhatsApp
Previous article
Thanksgiving airfares up roughly 10% compared with a year prior
Next article
Bob Iger is back. He’s the steady hand that Disney needs as CEO to get it back on track
- Advertisement -