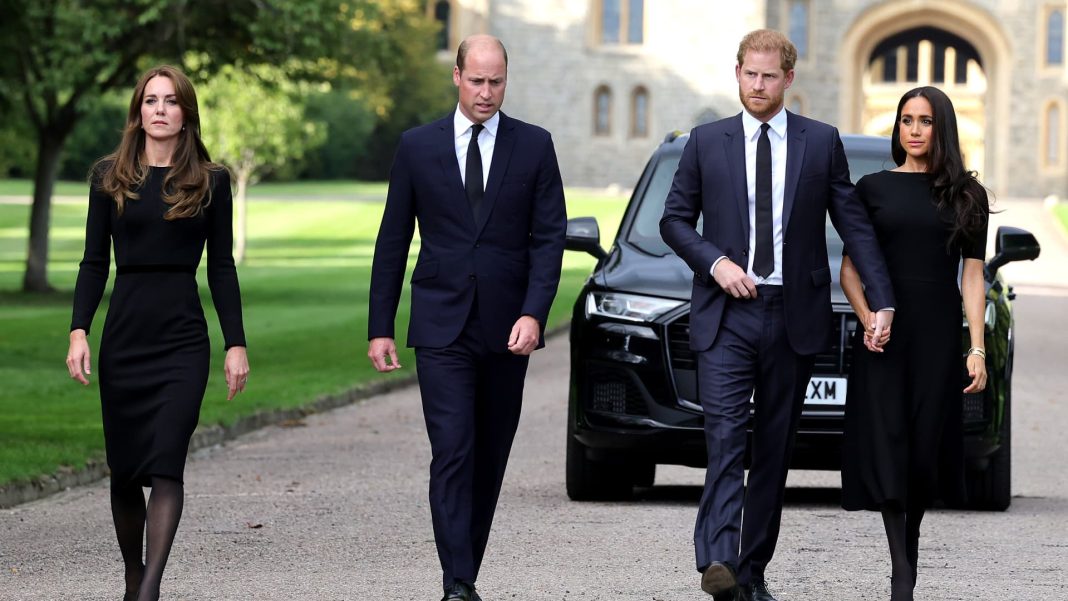 IN Netflix’s “Harry & Meghan” documentary, Prince Harry recalls being screamed and shouted at by his brother, William, the Prince of Wales, during a family summit.

Prince Harry has described the terror of being shouted at by his brother, Prince William, during a summit to discuss his and wife Meghan’s royal roles, in a new Netflix documentary.

“It was terrifying to have my brother scream and shout at me, and my father say things that just simply weren’t true, and my grandmother quietly sit there and sort of take it all in,” Harry says in episode five.

Netflix on Thursday dropped three further episodes in the six-part series it bills as an “unprecedented and in-depth” documentary.

They follow the release last week of three initial episodes, in which Harry and Meghan, Duchess of Sussex, hit out at what they called the “exploitation and bribery” of the British press.

You have to understand that from the family’s perspective, and especially from hers, there are ways of doing things.

The streaming platform on Tuesday said that the series had become its biggest documentary debut yet, attracting 81.55 million viewing hours globally within its first four days of release.

It also appeared in the streamer’s Top 10 TV list in 85 countries, and ranked number one in the U.K.

The initial installment acted as a love letter to the pair’s high-profile relationship, revealing new details of their first introduction in 2016, but it was notable as much for what it excluded as what it contained.

The second installment, however, has proved more explosive with seeming revelations about the events leading up to the couple’s ultimate decision to step down from the royal family in 2020.

A disclaimer at the beginning of episode one states that members of the royal family “declined to comment on the content within this series.” However, a senior royal source confirmed to NBC News that neither Buckingham Palace, Kensington Palace, nor any member of the royal family are aware of any such approach for comment on the content of the series.

‘There are ways of doing things’

Episode five recalls how, in January 2020, the late Queen called “an urgent meeting of senior royals at Sandringham to discuss a new role for the Duke and Duchess of Sussex”.

Known as the Sandringham summit, it included Harry, along with the then Queen, Charles and William.

“You have to understand that from the family’s perspective, and especially from hers, there are ways of doing things,” Harry says, referring to the Queen. “And her ultimate sort of mission, goal, or slash responsibility, is the institution.”

Netflix’s series about Prince Harry and Meghan has become the streaming giant’s biggest documentary debut yet.

Harry also noted in the episode that he had been thinking about relocating overseas for several years, and had written an email to his father telling him the couple would relinquish their Duke and Duchess of Sussex titles if they could not make a move abroad work.

Buckingham Palace and Kensington Palace have not yet publicly responded to the series, nor did they immediately respond to CNBC’s request for comment on the claims.

Being fed to the wolves

The rest of the series follows in a similar vein to the first installment, with the couple making claims about Meghan’s rejection by the royal family and the intrusion of the British press.

Meghan says she was told the royal establishment saw her as a “foreign organism.”

“It’s like this fish that’s swimming perfectly, and then one day this foreign organism comes in, and then the entire thing goes ‘what is that? What is it doing here? It doesn’t look like us, it doesn’t move like us, we don’t like it, get it off of us,” Meghan recalls her private secretary telling her in episode four.

“She just explained that, you know, they’ll soon see, that it’s stronger, faster, even better with this organism as part of it,” she continues.

Elsewhere, Meghan describes being “fed to the wolves” of the tabloid news media after failing to fit into the family.

The couple have long claimed that Meghan was mistreated by the British media, including due to her race — claims the media has rejected.

“It was already clear to the media that the palace wasn’t gonna protect her. Once that happens the floodgates open,” Harry adds.

Episode four also includes additional commentary from Meghan’s mother, Doria Ragland, who recalls her daughter wanting to take her own life due to the media backlash.

“I remember her telling me that she wanted to take her own life,” she says.

“I knew that it was bad, but to just constantly be picked at by these vultures — just picking away at her spirit — that she would actually think of not wanting to be here… that’s not an easy one for a mom to hear,” she adds.

“Harry & Meghan,” which was directed by Oscar-nominated Liz Garbus, marks one of a series of programs the Sussexes are producing under a commercial deal with Netflix as they forge new lives outside of the royal family.

Their production house, Archewell Productions, is due to release another Netflix series, “Heart of Invictus,” in 2023.