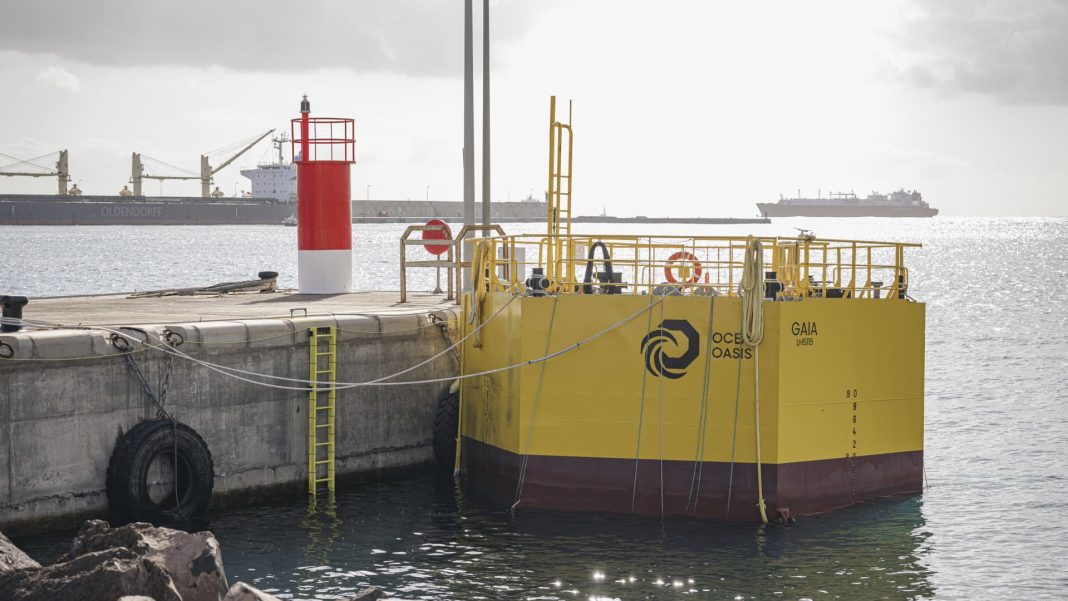 Ocean Oasis’ Gaia system has been designed to use wave power to desalinate water.

Plans to use marine energy to desalinate water received a further boost this week, after a Norwegian firm presented a system that will be put through its paces in waters off Gran Canaria.

In a statement Monday, Oslo-headquartered Ocean Oasis said its wave-powered prototype device, which it described as being an “offshore floating desalination plant,” was called Gaia.

The plant — which has a height of 10 meters, a diameter of 7 meters and weighs roughly 100 tons — was put together in Las Palmas and will undergo testing at the Oceanic Platform of the Canary Islands.

Ocean Oasis said its technology would enable “the production of fresh water from ocean waters by harnessing the energy of the waves to carry out a desalination process and pump potable water to coastal users.”

The company said the development of its prototype had received financial backing from a range of organizations including Innovation Norway and the Gran Canaria Economic Promotion Society.

The main investor in Ocean Oasis is Grieg Maritime Group, which is headquartered in Bergen, Norway.

The Canary Islands are a Spanish archipelago in the Atlantic Ocean. According to the Canary Islands Institute of Technology, the islands have been “a pioneer in the production of desalinated water at affordable cost.”

A presentation from the ITC highlights some of the reasons why. Describing the Canary Islands’ “water singularities,” it refers to a “structural water deficit due to low rainfall, high soil permeability and aquifer overexploitation.”

While desalination — which multinational energy firm Iberdrola describes as “the process by which the dissolved mineral salts in water are removed” — is seen as a useful tool when it comes to providing drinking water to countries where supply is an issue, the U.N. has noted there are significant environmental challenges linked to it.

It says that “the fossil fuels normally used in the energy-intensive desalination process contribute to global warming, and the toxic brine it produces pollutes coastal ecosystems.”

With the above in mind, projects looking to desalinate water in a more sustainable way will become increasingly important in the years ahead.

The idea of using waves to power desalination is not unique to the project being undertaken in the Canaries. In April, for example, the U.S. Department of Energy revealed the winners of the last stage of a competition focused on wave-powered desalination.

Back on the Canary Islands, Ocean Oasis said it would be looking to construct a second installation after testing at the PLOCAN facility had taken place. “In this phase, the prototype will be scaled with the capacity to produce water for consumption,” the company said.

While there is excitement about the potential of marine energy, the footprint of wave and tidal stream projects remains very small compared to other renewables.

For wave energy, 681 kW was installed, which OEE said was a threefold increase. Globally, 1.38 MW of wave energy came online in 2021, while 3.12 MW of tidal stream capacity was installed.

By way of comparison, Europe installed 17.4 gigawatts of wind power capacity in 2021, according to figures from industry body WindEurope.