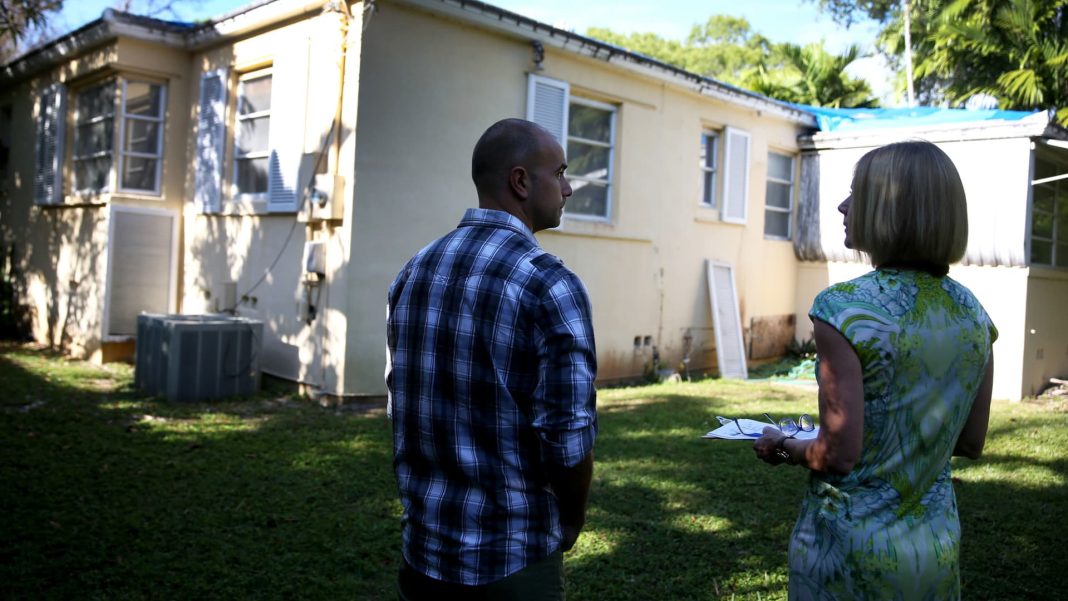 A prospective home buyer, left, is shown a home by a real estate agent in Coral Gables, Florida.

The average rate on the 30-year fixed mortgage dropped to 6.28% Tuesday, according to Mortgage News Daily. It is now at the lowest level since mid-September.

The decline came after a lower-than-expected reading of the November’s consumer price index, a widely watched measure of inflation. The report sent investors rushing into U.S. Treasury bonds, causing yields to drop. Mortgage rates follow loosely the yield on the 10-year Treasury.

“The second consecutive month of reassuring CPI data continues to build a case that inflation has turned a corner, but rates will be careful about reading too much into that potential shift given the volatility of the data in recent months,” said Matthew Graham, chief operating officer at Mortgage News Daily. “The bond market will also want to see what the Fed does with this info in tomorrow’s updated Fed rate forecasts in the dot plot.”

Mortgage rates began rising at the start of this year and accelerated in the spring and summer, with the 30-year fixed going from around 3% to well over 7% by the end of October. That sent the housing market into an early deep freeze. Sales of existing homes have fallen for nine straight months and were down 24% in October year-over-year, according to the latest read from the National Association of Realtors.

But rates then fell sharply in November, after the CPI report for October indicated that inflation was cooling. The rate ended November at 6.63%. Some suggested, albeit cautiously, that the drop in rates might be bringing buyers back to the market.

“There are some very very modest green shoots over the last few weeks, as rates have come down, but I am not ready to get sucked back into the conversation we had in August when we felt better,” Doug Yearley, CEO of luxury homebuilder Toll Brothers, said on the company’s quarterly earnings call with analysts last week. Yearly was referring to a very brief rate drop in August.

Redfin reported homebuyer demand “has started ticking up” in November. It’s demand index, which measures requests for home tours and other homebuying services from Redfin agents, was up 1.5% from a month earlier but down 20% from a year earlier during the four weeks ending Nov. 27.

“There have been a handful of pieces of relatively good news for the housing market lately, but we’re far from out of the woods,” said Redfin deputy chief economist Taylor Marr. “Key indicators of homebuying demand will likely be teetering on a knife’s edge with every data release that comes out related to the Fed’s path to eventually bringing rates down.”

All that optimism, however, did not translate into higher mortgage rate locks for homebuyers, which are generally an indicator of future home sales. Those rate locks fell 22% in November, compared with October, and were down 48% year-over-year, according to mortgage tech and data firm Black Knight.

“It’s still extremely unaffordable even with rates coming down, even with prices coming down in each of the last four months. We’re still less affordable than we were at the peak of the market in 2006, and you’re seeing that play out in the rate lock numbers,” said Andrew Walden, vice president of enterprise research strategy at Black Knight.

Walden points to inventory still being about 40% shy of where it should be, while the homebuilders continue to pull back and potential sellers stay on the sidelines. Even as prices weaken and rates come down, he said both are still substantially higher than they should be compared with incomes to make housing affordable by historical standards. And none of those are going to move that much any time in the near future.