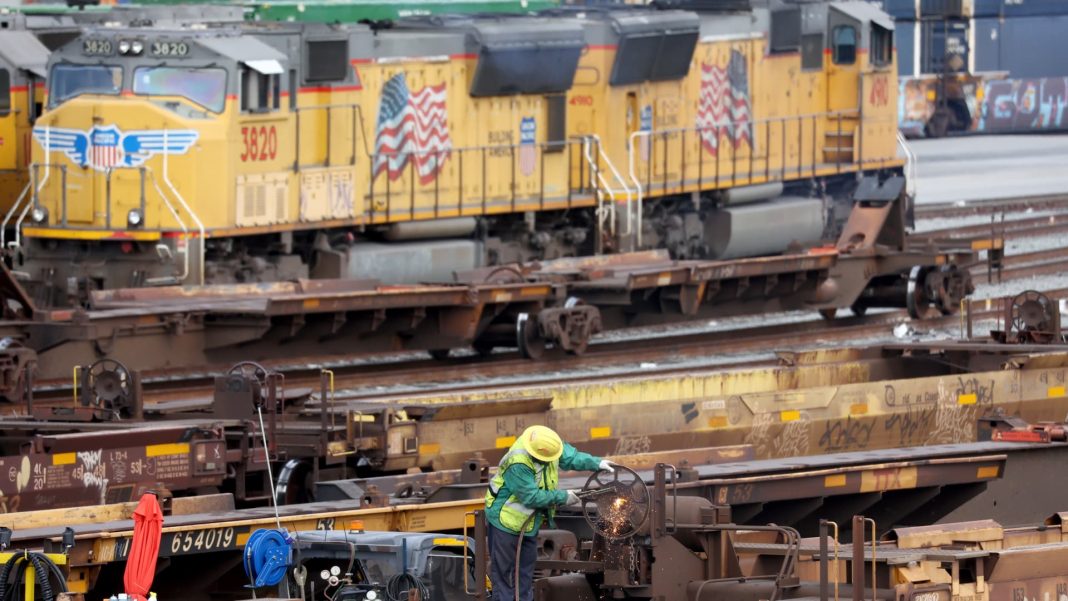 The House passed legislation Wednesday that would force a tentative rail labor agreement and thwart a national strike. House Speaker Nancy Pelosi also plans to hold a separate vote to add seven days of paid sick leave to the agreement.

The legislation then goes to the Senate, where Majority Leader Chuck Schumer, D-N.Y., has promised swift passage.

The 290-137 vote comes after President Joe Biden called on Congress to intervene in the stalled talks between railroads and some of the industry’s major unions. He met with the four House and Senate leaders Tuesday in an effort to avoid the economic impacts of a rail strike, which the industry forecasts could cost the U.S. economy $2 billion per day.

Biden has said he’s reluctant to override the vote against the contract by some unions, but that a rail shutdown would “devastate” the economy.

Railways and their labor unions had until Dec. 9 to reach an agreement before workers promised to strike. At issue is the amount of paid sick leave available to railroad workers.

In a statement Tuesday, the Brotherhood of Maintenance of Way Employees Division of the International Brotherhood of Teamsters said passing legislation to enforce an agreement denies them the right to strike and will not fix the problems or concerns of railroad workers.

The union said it was calling on Biden and any member of Congress who “truly supports the working class to act swiftly by passing any sort of reforms and regulations that will provide paid sick leave for all Railroad Workers.”

According to the Association of American Railroads (AAR), an industry group, a presidential board created to help resolve contract talks reviewed the union’s request for additional paid sick days and instead offered additional salary.

“If the unions are interested in a holistic discussion for structural changes as it relates to their sick time, I think absolutely the railroad carriers would be up for a holistic discussion but [they] have not done it in the zero hour,” AAR President and CEO Ian Jefferies said at a press conference on rail preparations.

Each union has its own sick day policy, according to National Railway Labor Conference. If an employee is sick, they need to be out of work between four and seven days before they collect their version of sick pay.

The tentative labor deal grants workers one additional personal day, for a total of three personal days for railroad workers. A worker must provide 48 hours notice to request a personal day.

Even the threat of a strike can have impacts on rail movement.

According to federal safety measures, railroad carriers begin prepping for a strike seven days before the strike date. The carriers start to prioritize the securing and movement of sensitive materials like chlorine for drinking water and hazardous materials.

Ninety-six hours before a strike date, chemicals are no longer transported. According to the American Chemistry Council, railroad industry data shows a drop of 1,975 carloads of chemical shipments during the week of Sept. 10 when the railroads stopped accepting shipments due to the previous threat of a rail strike.

Corey Rosenbusch, president and CEO of The Fertilizer Institute, said railroad carriers have told their members that ammonia shipments, a critical component for fertilizer companies, would not be allowed on the rail starting Dec. 4 if a labor agreement isn’t reached.

“It traditionally takes five to seven days for the supply chain to catch up when you have a shutdown,” said Rosenbusch. “Fertilizer manufacturing would have to be curtailed.”

The four major railroads typically move more than 80% of the agricultural freight traffic, according to the National Grain and Feed Association.

“We are looking for alternatives now to position our product,” said Mike Seyfert, the association’s president and CEO. “We have zero elasticity right now. There are zero drivers, and the barge situation with the low water levels has only added to this challenge.”

Brendan Branon, chair of the National Railway Labor Conference, told CNBC that Congress, in voting on the labor deal, is also weighing in on the future of collective bargaining. He urged Congress to follow the recommendations of the Presidential Emergency Board, which Biden created in July to resolve the ongoing dispute between major freight rail carriers and unions.

The board crafts its recommendations under a principle known as pattern bargaining, which is the process used by trade unions and employers where demands and entitlements are made.

“Pattern bargaining promotes stability in collective bargaining, and it encourages settlement,” Branon said. “There’s any number of arbitrators and PEBs who have recognized that this is not only acceptable, this is the most appropriate form to settle complex negotiations, especially multi-employer, multi-craft agreements.”

Branon said a number of industries including the railroads have developed a set of clear practices in bargaining and the additional negotiating by the unions after the tentative agreement departs from the framework recommended by the PEB.

“Departing from a pattern would establish a precedent that there’s still a better outcome achievable, and I think it would pose significant stress and risk for collective bargaining in the future for the railroad industry,” he said.