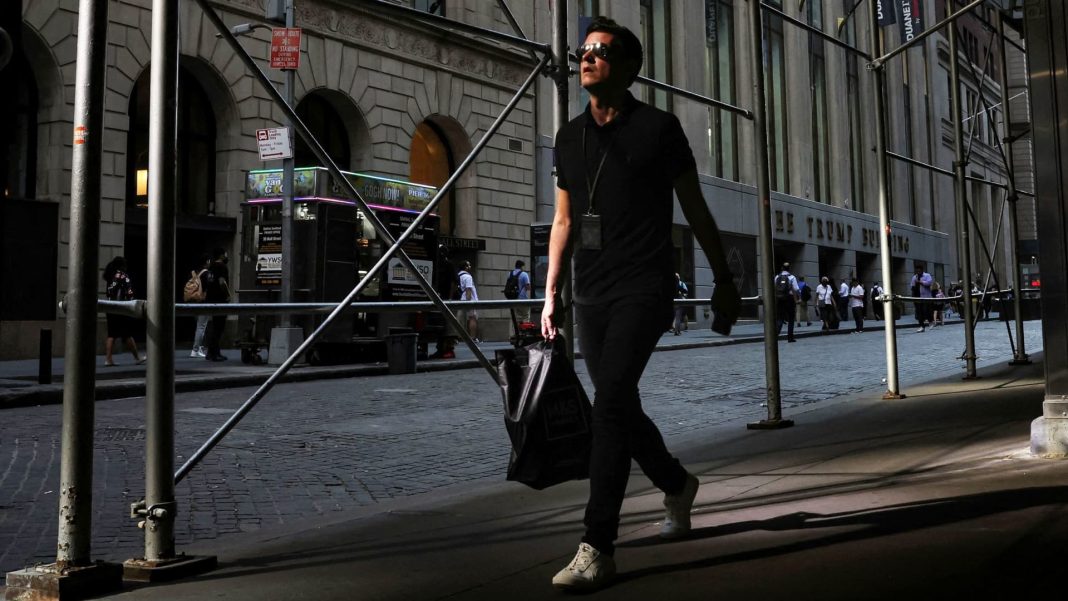 A man walks on Wall St. during the morning commute, as the city deals with record temperatures and the excessive heat, in New York, July 20, 2022.

The consulting firm on Wednesday released its second annual EY Future Workplace Index, which showed a growing appetite for hybrid work and an increase in both the use of flexible working options and the presence of a four-day workweek.

Forty percent of companies surveyed either have implemented or have begun to implement a four-day workweek, EY said in a press release, an approach that has gained popularity abroad but has seen little adoption in the U.S. until recently.

Hybrid work showed a marked uptick from 2021, the survey showed, with 70% of employers surveyed adopting a hybrid approach, which has employees working from home two to three days a week.

The four-day workweek and the growth of a hybrid workforce are both parts of what EY said is a shifting landscape in real estate management for corporate leaders. “The economic downturn will force leaders to make important decisions regarding their real estate portfolios — from investments, to space optimization, to workforce models,” EY partner Mark Grinis said in the press release.

Executives continue to invest in improving employee quality of life, according to EY. Forty-six percent of surveyed employers plan to introduce in-office baristas. A third of surveyed executives plan to implement or extend their childcare options for employees. These changes come after the Covid-19 pandemic bruised employees and drove an uptick in resignations across sectors. The EY survey found that surveyed companies have begun to invest in in-office amenities to boost return-to-office rates and employee retention.

The EY report comes amid mass layoffs in all industries, but especially in tech, where skilled employees enjoyed expansive perks and office amenities. Meta, Amazon and Twitter have all announced reducing headcount by the thousands. At Google parent company Alphabet, even with a hiring slowdown in place, an activist investor is demanding CEO Sundar Pichai cut Google’s headcount and employee expenses.

According to the EY survey, however, only a third of surveyed executives plan to reduce investment in commercial real estate. Over half of those surveyed plan to improve or expand their existing portfolios.

Elon Musk, on the other hand, shows no sign of following the executives EY surveyed. Decrying Twitter’s catering expense — which he claimed was $13 million annually in San Francisco alone — the new Twitter chief has yanked free lunches and told employees that they must return to the office.