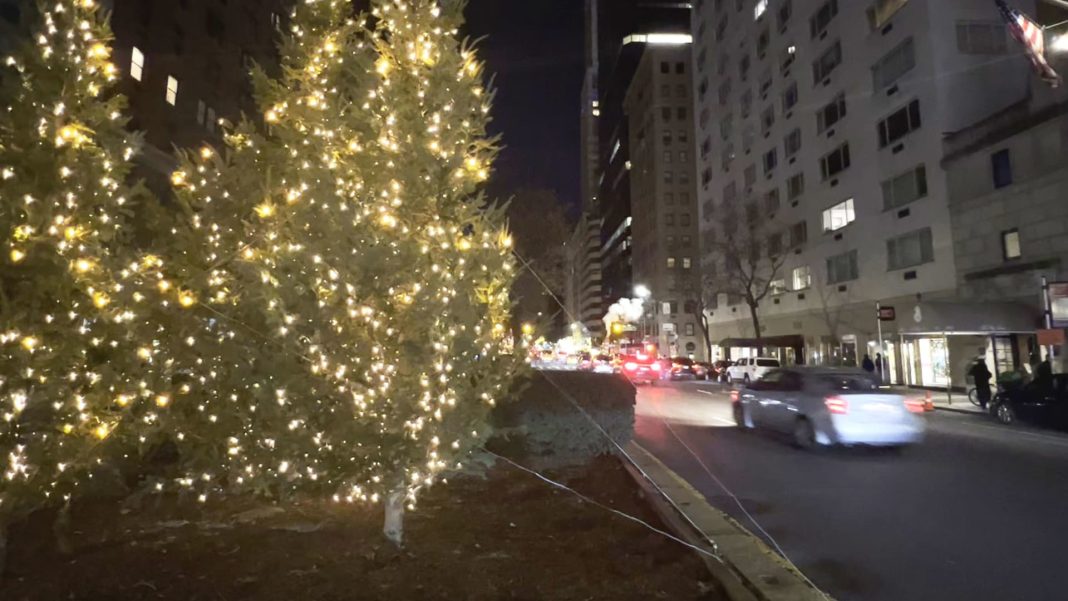 NEW YORK – The prestigious Park Avenue neighborhood has a small business to thank for bringing holiday cheer to its streets year after year.

City-Scape Landscaping, a family-run operation based in Queens, installs 120 fir trees shipped from Nova Scotia, Canada, along the avenue for almost 50 blocks, from 49th to 97th streets.

The business has maintained the avenue’s grassy medians – known as the Park Avenue Malls – for 50 years. A crew of six to seven City-Scape employees positions the fir trees. The company brings in more than $1 million in annual sales from all its clients, according to Experian Business Data. The fir tree process accounts for close to $100,000 of that a year.

Park Avenue has been a key part of the company’s business since 1972, City-Scape’s owners said, helping pay salaries and keep families fed.

Shortly thereafter, Van de Wetering moved to Long Island to start Van de Wetering Greenhouses, which continues to keep the avenue lush with tulips and seasonal flora. He passed off mall maintenance permanently to the Sofields, and City-Scape was in business.

“I don’t think Park Avenue would have quite the same glamour if the median walls weren’t in place,” said Vincent Sofield’s son, Dylan. “I think it really creates a good contrast with the concrete jungle — kind of softens your eyes up a little bit, makes it less aggressive.”

A half-century later, City-Scape is keeping the business in the family. After becoming a co-owner earlier this year, 26-year-old Dylan is taking over the operation in the wake of his father’s recent passing.

“A lot of people don’t believe me when I tell them I own the company,” he told CNBC earlier this year. “They ask for the boss, and I say, ‘You’re looking at him.’ But they quickly lose that once they realize I know what I am talking about.”

Sofield said he has played a role in the business since he was young, not because he had to, but because he “always wanted to be involved.”

“I was probably pulling a rake before I could walk,” he joked.

Despite the avenue’s high profile, Sofield said he has felt unphased by it because it is “all he knew” growing up. But as he has gotten older, he now recognizes that Park Avenue is not just any landscaping job.

“It’s definitely something to be proud of,” Sofield said. “I see my work all over the place, TV, Instagram. I will be scrolling and think, ‘Oh, there’s my tulips,’ or ‘There’s my lawn.'”

For most of the year, City-Scape tends to the malls every Monday ahead of high traffic weekdays. Crews weed, mow the lawns and hedges, remove debris, water the plants and repair damaged wood barriers.

The company is hired by the Fund for Park Avenue — the neighborhood nonprofit responsible for the malls — to maintain the green spaces year-round.

The malls change by the season: tulips in the spring, begonias in the summer, chrysanthemums in the fall and temporary fir trees in the winter.

“It’s people’s front yard, front gardens along Park Avenue,” said the group’s president, Barbara McLaughlin. “So everyone who’s lucky enough to live on Park Avenue really enjoys it every day, but also, it’s a wonderful place to walk and it’s enjoyed by a lot of people.”

The trees are lit up at the annual Park Avenue tree lighting at Brick Presbyterian Church, an event that drew 4,000 people this year, a church spokesperson said.

“It’s such an intimate event for New York City,” McLaughlin said. “It’s a neighborhood event, neighborhood feel, but all are welcome.”

The trees will be taken down in mid-January.

“We’d love to have them stay longer, but they’re not planted,” McLaughlin said. “These trees are installed temporarily, so they do get dry.”

And as the trees mark the changing of seasons, they also mark a season of change for City-Scape. It was Dylan Sofield’s first holiday tree installation running the business without his father.

“I still have the help of my family,” he said. “My uncle is still around, and he’s been doing this for 50 years; he’s not going anywhere.”