Dubai is cashing on on the 2022 Qatar World Cup 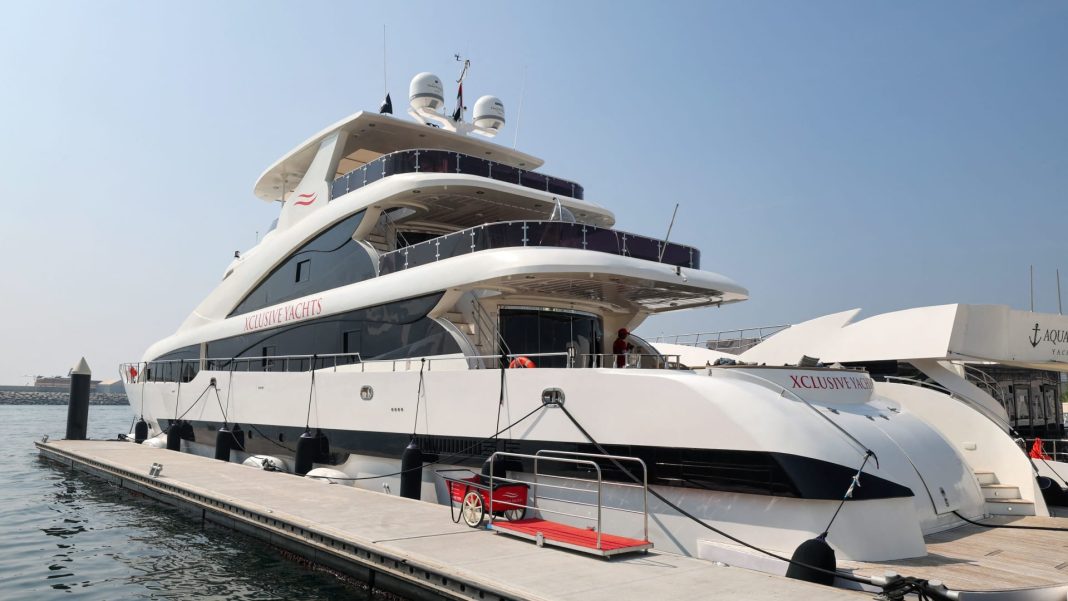 A yacht that can be rented to watch the World Cup while sailing around Dubai is docked in Dubai harbor on November 1, 2022, ahead of the Qatar 2022 FIFA World Cup football tournament. Photo by Giuseppe CACACE / AFP) (Photo by GIUSEPPE CACACE/AFP via Getty Images)

DUBAI, United Arab Emirates — Qatar isn’t the only country getting a massive boom in tourism thanks to its hosting of the 2022 World Cup.

The neighboring United Arab Emirates is set to benefit from the wave too, with its glitzy commercial capital of Dubai set to see an estimated 1 million additional visitors during the course of the soccer tournament, according to the Dubai Sports Council.

Paul Griffiths, CEO of Dubai Airports, in August called Dubai “the major gateway” to the World Cup and predicted it would see more tourists than Qatar itself.

And the city is pulling out all the stops, leveraging its reputation as a hyper-modern city more liberal and built-out than Qatar and advertising the extravagant tourist attractions it’s developed a reputation for.

Dubai is known for over-the-top and outlandish experiences — like its indoor ski slope complex in the desert, the world’s deepest man-made plunge pool, the world’s tallest building and largest Ferris wheel. It’s now added specific World Cup-themed experiences, simultaneously taking advantage of the fact that Qatar, a tiny country of 3 million people, is struggling to accommodate all its expected tourists and many of them will opt to lodge in Dubai for the matches instead.

This has been made possible by “match day air shuttles” being operated by Qatar Airlines and Dubai-based low-cost carrier FlyDubai– allowing travelers to book same-day round-trip flights from Dubai or nearby Oman to attend a match in Qatar and return in less than 24 hours.

“Only an hour away from Qatar by flight, Dubai is a familiar destination for global travelers,” Taufiq Rahim, a research fellow at the Mohammed bin Rashid School of Government, told CNBC. “Its tourism infrastructure and straightforward entry requirements make it a convenient base for World Cup fans.”

Qatar is expected to have delivered 45,000 hotel rooms in total by the start of November, according to Cushman & Wakefield Qatar, with tournament accommodation “bolstered by cruise ships, camping facilities, apartments and villas.” Dubai, meanwhile, as a city has more than 140,000 hotel rooms, according to hotel data firm STR.

Around the UAE’s different emirates, 43 fan zones for watching matches have been set up, with some of the biggest – like Budweiser’s official BudX fan zone in Dubai Harbor – big enough to host 10,000 fans daily with matches aired on enormous 3,552 square-foot screens. There’s even a soccer-themed hotel on Dubai’s man-made Palm archipelago, where the most dedicated fans can stay while being shuttled in and out of Doha for daily matches.

A general view of the downtown area in Dubai, United Arab Emirates, December 08, 2021.

A $20,000 per night match viewing experience

Dubai’s revenue won’t just be coming from hotel stays and restaurants. Visitors to the emirate can rent superyachts running in the tens of thousands of dollars per night to watch matches while sailing through the Persian Gulf.

Xclusive Yachts, the UAE’s largest private charter yacht company, offers its most opulent seaborne experience at $20,000 per night on a tri-deck superyacht complete with a skydeck, onboard bar, skylounge, five cabins and a Michelin-starred chef serving gourmet meals.

“We are expecting a more than 300% [rise] in yacht bookings in November and December mainly due to visitors for the World Cup and Qatar who are also looking for leisure activities in Dubai,” Managing Director Amit Patel told Doha News in October.

Flight traffic is also shooting up — Dubai Airports in mid-November announced that a whopping 120 shuttle flights will fly in and out of the Dubai World Central airport each day between the tournament’s start and end dates of Nov. 20 and Dec. 18.

And on Monday, the CEO of Flydubai, Ghaith Al Ghaith, said that nearly all of the airline’s match-day shuttle flights to Doha were at full capacity.

“This is a pattern that looks set to continue over the next couple of days and weeks,” Al Ghaith said.

Flydubai and Qatar Airways will be jointly running the match day shuttle flights between DWC and Doha. With the addition of flights from Dubai’s main airport, Dubai International (DXB), travelers can catch a flight every 30 to 50 minutes.

But like everything in Dubai, there’s a luxury option if you have the cash to spend: Private jet charter companies have seen a boom in business, with some fans willing to pay eye-watering sums to get to matches.

The company even decked out its VIP terminal at DWC airport as a World Cup fan zone, with a mini soccer pitch and other themed decorations.

Despite the steep prices, demand for private flights is significantly higher than this time last year, charter operators are reporting, though the figures vary from company to company.

“There’s obviously some people that are waiting to see if their favorite team gets past the qualifying rounds,” Moore told Gulf News.

“We strongly encourage our clientele to book with us as early as possible, even with a private jet, given the restrictions, and the amount of volume of flights that Doha is expecting, you need to be well organized and well-structured.”