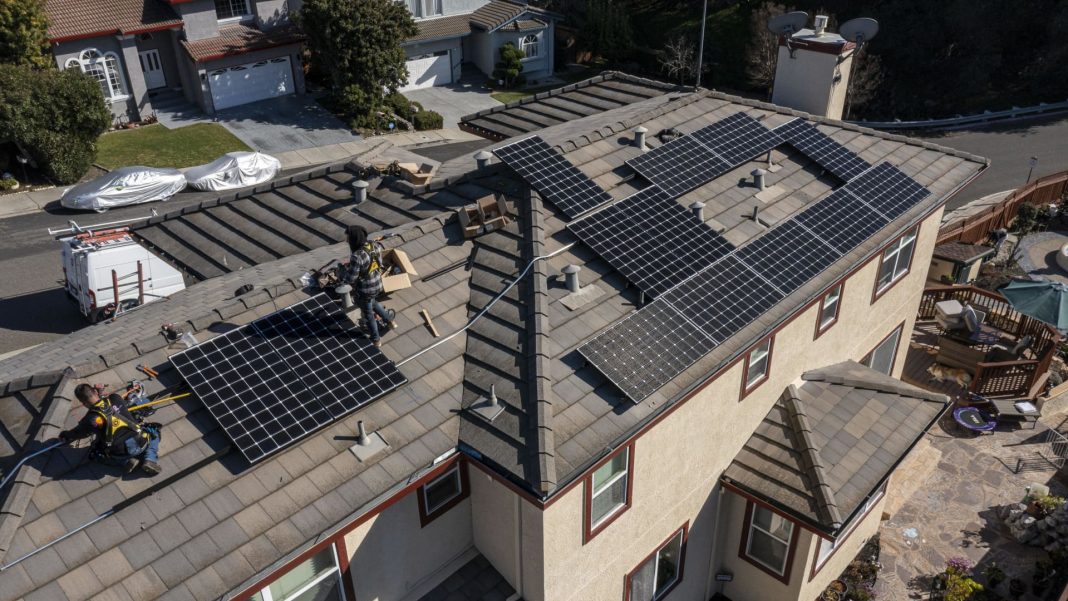 Save A Lot Solar contractors install LG Electronics solar panels on a home in Hayward, California, U.S., on Tuesday, Feb. 8, 2022.

The California Public Utilities Commission on Thursday passed a proposal that will reduce compensation provided to households for the surplus electricity their rooftop solar panels contribute to the electric grid.

Utilities and consumer groups have argued the incentive payments have unfairly favored wealthier consumers and harmed poor and low-income households. But solar companies and renewable advocates have said that lowering the compensation would slow solar installations and hinder the state’s goals to address climate change.

The proposal, which California utility regulators unveiled last month, will change a net metering policy by paying solar owners for extra power at a lower rate, which is determined by the cost the utility would need to spend to purchase clean power from an alternative source. The solar industry has said the plan would amount to a 75% cut in average payment rates to customers.

Today’s unanimous vote by the five-member commission was monitored across the country, since California is widely viewed as a leader in the renewable energy buildout. The impact of today’s decision will likely extend beyond the state and have implications for the solar industry nationwide, particularly companies in the residential solar space like Sunrun, SunPower, Sunnova, and Tesla.

More than 1.5 million homes, businesses and other utility customers in California have rooftop solar panels. The utilities commission estimates that these installations can collectively produce 12 gigawatts of electricity.

The proposal would have no impact on existing rooftop solar customers and would maintain their current compensation rates, and would also encourage consumers to install batteries with their solar panels, the commission said.

Affordable Clean Energy For All, a nonprofit funded by California’s utilities, has argued that the rooftop solar program is outdated and that utilities have to pass along the costs of subsidies, creating higher bills for millions of customers who don’t install solar, including those least able to pay for electricity costs.

However, solar companies have argued that the existing net metering system is necessary to spur people to choose rooftop solar.

The changes to the state’s solar incentive program could cut California’s solar market in half by 2024, according to a report released earlier this year from energy research firm Wood Mackenzie.

“This misguided decision, which undervalues solar’s numerous benefits for all Californians, will dim the lights on the growth of solar in the Golden State,” said Laura Deehan, state director for Environment California, following the vote.

Roger Lin, an attorney at the Center for Biological Diversity’s energy justice program, said in a statement that the commission “has taken a step backward by widening the divide between those who can afford solar and those who can’t.”

“It’s an affront to low-income communities who are hit by the climate crisis first and worst, and we’ll do everything we can to convince the commission to fix the deep flaws in its proposal,” Lin said.

California, which is grappling with wildfires and drought fueled by climate change, has a goal to transition to 100% renewable energy by 2045.