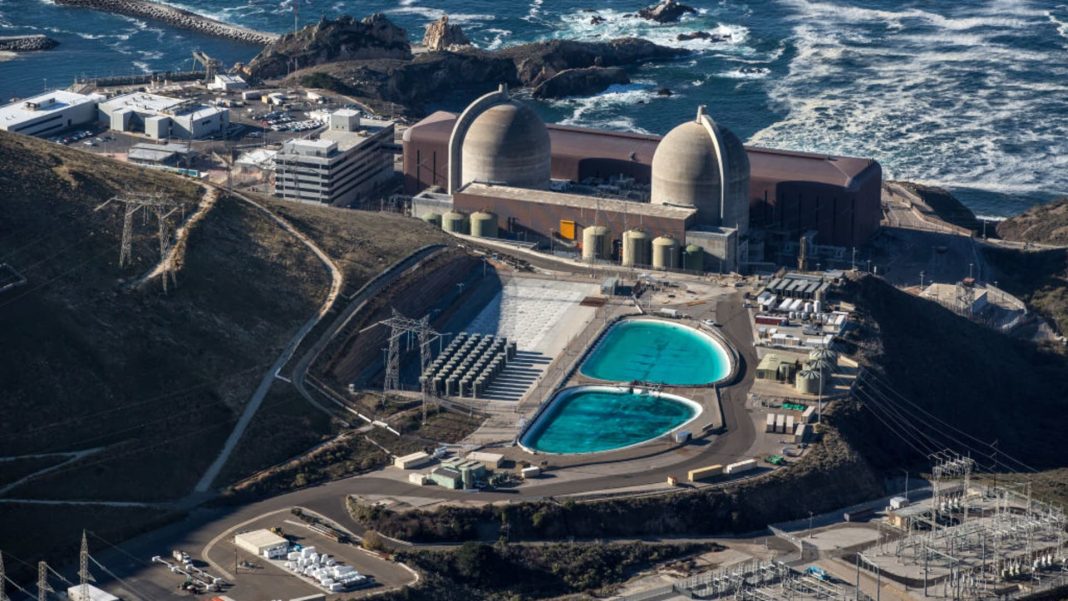 Aerial view of the Diablo Canyon, the only operational nuclear plant left in California, due to be shutdown in 2024 despite safely producing nearly 15% of the state’s green electrical energy power, is viewed in these aerial photos taken on December 1, 2021, near Avila Beach, California.

Diablo Canyon was originally scheduled to be decommissioned in two phases in 2024 and 2025, but state lawmakers in September voted to keep it open for five more years. PG&E applied for funding in the Department of Energy’s initial phase of the $6 billion Civil Nuclear Credit program aimed to keep U.S. nuclear power reactors open.

The conditional funding, which comes from the bipartisan infrastructure law passed by Congress last year, creates a path forward for Diablo Canyon to remain open and could allow PG&E to pay back some of the $1.4 billion loan for the plant that lawmakers approved.

Diablo Canyon is California’s single largest source of power, providing 8.6% of the state’s total electricity and 17% of its zero-carbon electricity. It has helped the state grapple with power shortages as temperatures in California continue to rise and heat waves grow more intense with climate change.

“This is a critical step toward ensuring that our domestic nuclear fleet will continue providing reliable and affordable power to Americans as the nation’s largest source of clean electricity,” Energy Secretary Jennifer Granholm said in a statement.

However, critics of Diablo Canyon have pointed out that the plant, which is located next to the Pacific Ocean in San Luis Obispo County, is vulnerable to earthquakes and that there is no permanent waste disposal solution.

Final terms of the grant are subject to negotiation and finalization, the Energy Department said, but the funding is designed to cover PG&E’s anticipated losses from keeping Diablo Canyon open. Not every plant that applied to the Energy Department’s program is receiving funding in this initial phase.

The Biden administration has argued that nuclear power is vital to fighting climate change and to helping it achieve its commitment of 100% clean electricity by 2035 and a net-zero emissions economy by 2050.

“Nuclear energy will help us meet President Biden’s climate goals, and with these historic investments in clean energy, we can protect these facilities and the communities they serve,” Granholm said.

Nuclear power provides 50% of the country’s carbon-free electricity, but shifting energy markets and other economic factors have resulted in the early closures of 13 commercial reactors since 2013, the Energy Department said.

Sen. Dianne Feinstein, D-Calif., said in a statement that keeping the Diablo Canyon plant open is necessary for the state to meet its clean energy goals while continuing to supply reliable power. Feinstein said she would monitor the funding process to ensure strict safety and environmental reviews are undertaken at the federal and state levels.

California Gov. Gavin Newsom said in a statement that the grant will provide a limited-term extension of the plant and “support reliability statewide and provide an onramp for more clean energy projects to come online.”