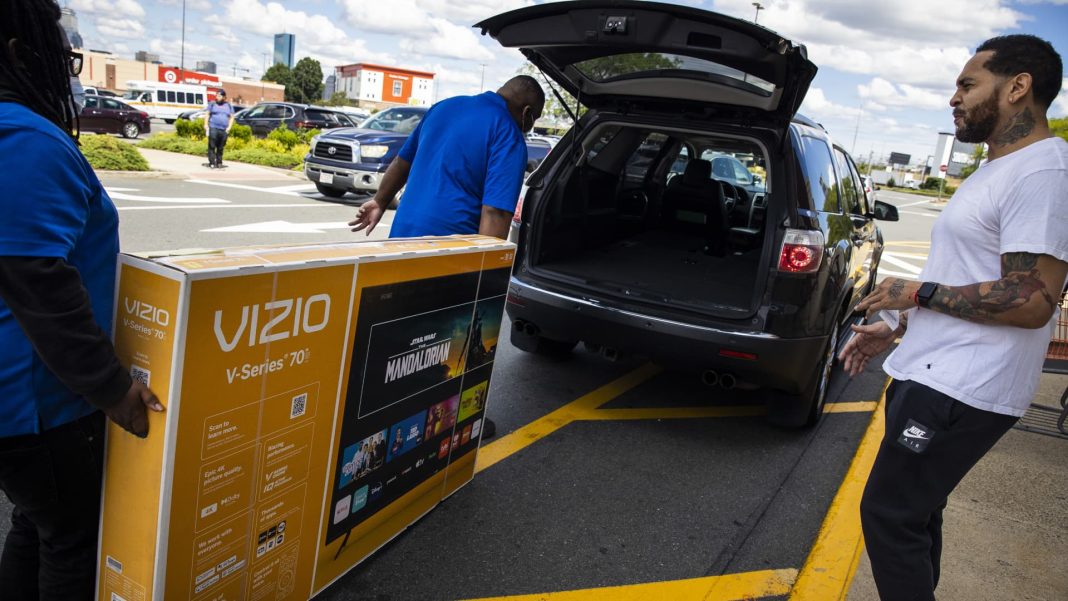 A customer watches as Best Buy employees load his new television into his car during the state’s sales tax free weekend, beginning on Saturday.

The consumer electronics retailer, which had cut its forecast this summer, reiterated its outlook for the holiday quarter. It raised its full-year forecast to reflect the beat, saying it expects comparable sales to decline about 10%.

Shares of the company rose more than 7% in premarket trading Tuesday.

Here’s how the retailer did for the three-month period ended Oct. 29 compared with what Wall Street was anticipating, according to a survey of analysts by Refinitiv:

While Best Buy’s quarterly results were better than expected, demand is down from the heights of the pandemic, when consumers turned to its stores for home theaters, computer monitors, kitchen appliances and more while working, playing and cooking at home.

CEO Corie Barry said holiday shopping patterns are also shifting to a more typical pre-pandemic pattern. In a news release, she said the retailer expects customers to spend more during Black Friday, Cyber Monday and the two weeks leading up to Christmas.

Best Buy is staring down a more uncertain sales environment this holiday season. Some inflation-pinched consumers are pulling back on discretionary items and spending more money on necessities and experiences. The company joined other retailers in slashing its outlook this summer. It said at the time that it expects same-store sales to drop by about 11% for the 12-month period ending in January.

A month after Best Buy warned of slower sales, it cut jobs across the country.

Yet, so far, the company has topped its own expectations.

Comparable sales fell by 10.4%, less of a decline than the 12.9% that analysts expected, according to FactSet. The key metric, also called same-store sales, tracks sales online and at stores open at least 14 months.

It was also less of a drop than the retailer anticipated. Best Buy had not given specific guidance for comparable sales in the third-quarter, but its Chief Financial Officer Matt Bilunas had cautioned it would drop more than the 12.1% decline in the second quarter.

The company said it has resumed share buybacks, which it paused when it took down its forecast in July. Best Buy said it plans to spend about $1 billion on share buybacks this year.

Barry said the company is tightly controlling its inventory, which was down 14.7% year over year. The retailer anticipated a decline in demand and lapped a year-ago period when shipments arrived both early and late because of a supply chain challenges.

Inventory has been a closely watched metric in the retail industry, as many companies cope with a glut of unwanted goods and have had to mark down items, cancel orders or pack and store goods.