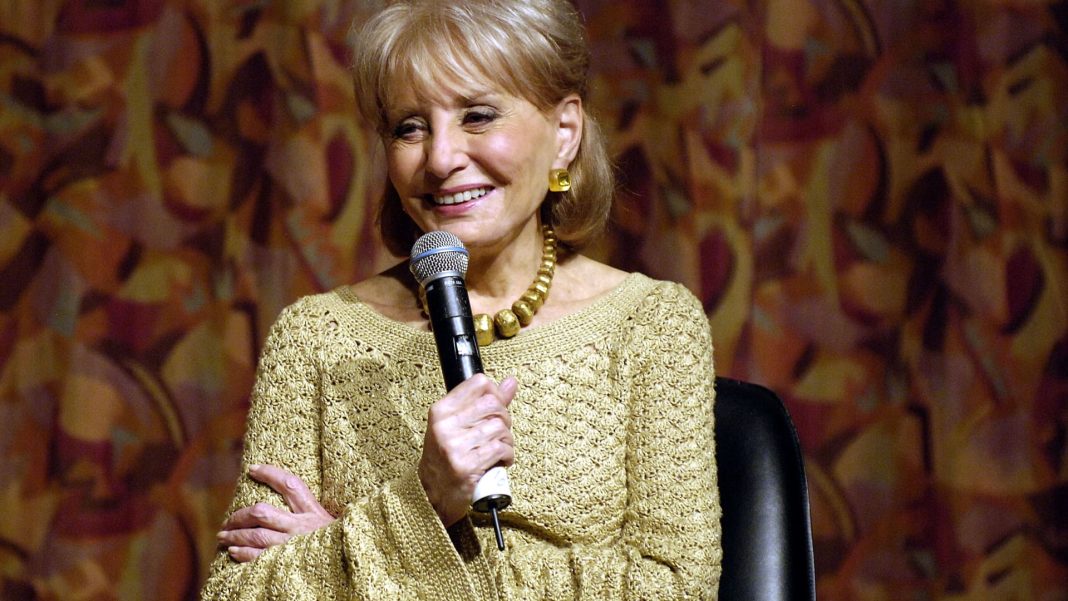 Barbara Walters, the pioneering TV broadcaster who blazed a trail for women in a male-dominated medium, died Friday. She was 93.

Her death was confirmed by her representative, Cindi Berger, who said Walters died “peacefully in her home surrounded by loved ones.”

“She lived her life with no regrets,” Berger said. “She was a trailblazer not only for female journalists, but for all women.”

ABC, the network where she last worked, aired a special report Friday night announcing Walters’ death and reflecting on her career. Bob Iger, CEO of the Walt Disney Company, parent of ABC, said in a statement Walters died Friday evening at her New York City residence.

He called her “a pioneer not just for women in journalism but for journalism itself.”

Walters was known in recent years as the co-creator and matriarch of the hit ABC daytime show “The View,” but older viewers remember her as the first female anchor of a network news program and the pre-eminent interviewer on television. She earned that reputation with a penchant for meticulous preparation, whether she was interviewing despots or divas, models or murderers.

“I do so much homework, I know more about the person than he or she knows about themselves,” Walters said in a 2014 television special.

That drive proved essential to her success. When she broke into the business in 1961 as a writer on NBC’s “TODAY” show, the idea of a woman sitting down and interviewing a sitting president on prime-time network television (which she did just over a decade later) seemed more fantasy than reality in an industry dominated by men like Edward R. Murrow and Walter Cronkite.

“She was playing in a field that was such an old boy’s network, literally and figuratively, and she didn’t take no for an answer,” Robert Thompson, director of the Bleier Center for Television and Popular Culture at Syracuse University, told NBC News before Walters’ death.

“At some point, the things that had been a liability for her, being a woman trying to get a foothold in a male-dominated industry, began to become more of an asset,” Thompson said. “She was smart and prepared, but at the same time she came across as more compassionate (than her male peers).

“Barbara Walters proved to be the evolutionary step between Edward R. Murrow and Oprah Winfrey.”

In some ways, Walters had been preparing for those trademark interviews all her life. Born in Boston on Sept. 25, 1929, Barbara Jill Walters got to see the rich and famous up close as the daughter of nightlife impresario Lou Walters, who owned clubs up and down the East Coast.

“I learned that celebrities were human beings,” Walters said in 2014. “I never thought of a celebrity as someone so perfect and wonderful that I should be put off.”

Inheriting her father’s drive, Walters graduated from Sarah Lawrence College with a bachelors degree in English and broke into journalism as an assistant at NBC affiliate WRCA-TV. In 1955, she married businessman Robert Henry Katz, but her first love remained her fledgling career. The couple divorced three years later.

Hired as a writer and researcher on “TODAY,” Walters rose to become the only female producer on the show and started filing in on air occasionally as the “TODAY Girl,” a reporting role reserved for fashion shows, lifestyle trends and the weather that was previously held, among others, by Florence Henderson of “Brady Bunch” fame.

Hardly the kind of hard reporting to which Walters clearly aspired.

Off-air, Walters married the theater producer Lee Guber in 1963, with whom she adopted a daughter, Jacqueline, named after Walters’ older sister, who was developmentally disabled. The marriage would last 13 years.

Her big breakthrough came with an assignment to travel with Jacqueline Kennedy on the first lady’s trip to India in 1962. That led to more newsy pieces and a bump in status to co-hosting responsibilities opposite Hugh Downs — though she didn’t get the official title until 1974. By that time, Downs had left the network and was replaced by Frank McGee.

McGee, who died shortly after being partnered with Walters, demanded that he ask three questions to every one of Walter’s in studio interviews. He was a real newsman, after all.

So, Walters started fielding interviews outside the studio, quickly building a reputation as an incisive and probing questioner.

People were watching — including executives at rival networks. Walters was lured to ABC to become the first female co-anchor of a prime-time news broadcast with an unprecedented $1 million annual salary. It didn’t take long, however, for viewers to sense the tension between Walters and co-anchor Harry Reasoner, who couldn’t be bothered to hide his disdain for this former “TODAY Girl” being billed as his equal.

With ratings of her ABC news program a disappointment, Walters’ career was saved by the prime-time interview specials she started for ABC. Her first interview featured President-elect Jimmy Carter, and within a year she had managed a joint interview with Prime Minister Menachem Begin of Israel and Egyptian President Anwar Sadat — a year before their historic peace treaty.

But it was her interviews that remained Walters’ passion, compiling her mix of tough and amusing questions on her trademark 3×5 index cards and fussing with the order even after the cameras started rolling. In the 2014 television special that commemorated her retirement from TV journalism, Walters showed off an autographed photo from Cuban despot Fidel Castro that hung on her wall: “For the longest and most difficult interview I’ve ever done in my life.”

Though Walters received much flak for asking Katherine Hepburn, “What kind of tree are you?” — in fairness, a follow up to something the legendary actor had said — she could deliver the toughest of questions, like looking Russian President Vladimir Putin in the eye and asking him if he had ever ordered the death of a rival.

Her exclusive interview with Monica Lewinsky in 1999 earned the highest ratings in history for a prime-time interview. In 1997, Walters debuted a new show that was closer to her “TODAY” roots: a midmorning talk show with an all-women panel called “The View.” While she was co-executive producer and had a seat at the table, she tapped Meredith Vieira as the first moderator.

Over the years, the hit show would include Whoopi Goldberg, Star Jones, Lisa Ling, Joy Behar, Elisabeth Hasselbeck, Rosie O’Donnell and Meghan McCain among the panelists.

While Walters largely managed to avoid controversy over her long career, she caused a stir with the revelation that she had had an affair with Sen. Edward Brooke, R-Mass., during the 1970s.

After nearly 60 years in journalism, Walters announced she was retiring in 2014.

“I do not want to appear on another program or climb another mountain,” she said. “I want instead to sit on a sunny field and admire the very gifted women — and OK, some men, too — who will be taking my place.”