Bankman-Fried will sit in Bahamas prison until Feb. 8, 2023: Photos 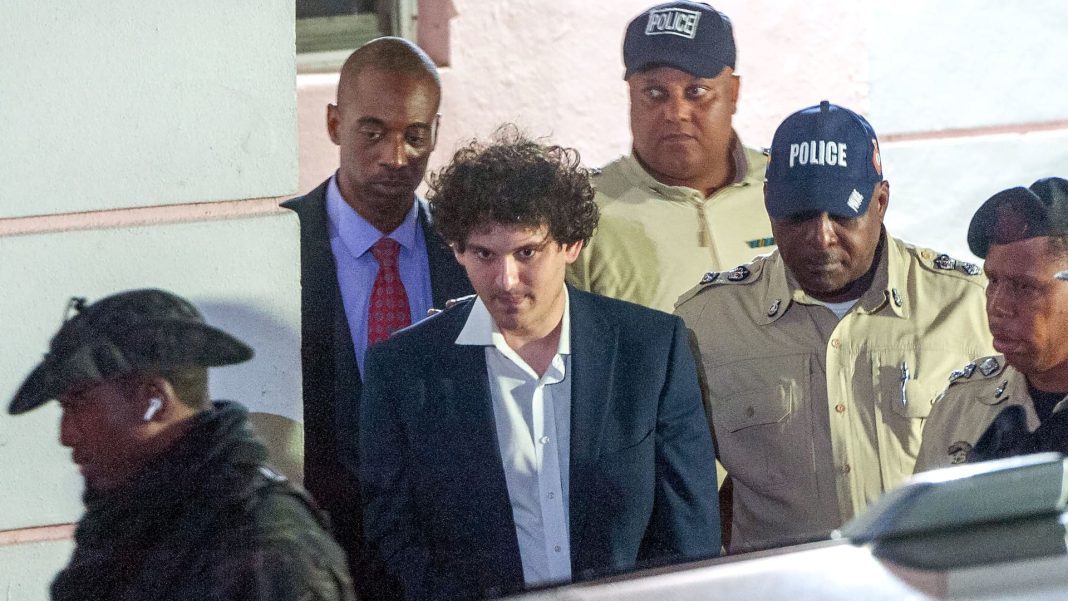 TOPSHOT – FTX founder Sam Bankman-Fried (C) is led away handcuffed by officers of the Royal Bahamas Police Force in Nassau, Bahamas on December 13, 2022. – Disgraced cryptocurrency tycoon Sam Bankman-Fried was hit with multiple criminal charges December 13, 2022, accused of committing one of the biggest financial frauds in US history. Bankman-Fried will serve time at The Bahamas Department of Corrections until February 8, 2023. (Photo by Mario Duncanson / AFP) (Photo by MARIO DUNCANSON/AFP via Getty Images)

Philip Davis, the prime minister of the Bahamas, once touted FTX’s arrival in the Bahamas as an example of the professionalism of Bahamian securities regulators in ensuring “good actors, as opposed to bad actors, come into this space.”

FTX founder Sam Bankman-Fried (2nd L) is led away handcuffed by officers of the Royal Bahamas Police Force in Nassau, Bahamas on December 13, 2022.

In court on Tuesday, Bankman-Fried had swapped his signature FTX t-shirt and shorts for a blue jacket and a white button-down, as lawyers pleaded for a judge to allow him to be released on $250,000 bail with an ankle monitor.

Bankman-Fried’s parents watched on as a Bahamian magistrate judge quashed any chance of Bankman-Fried’s return to his house. Citing a “great” risk of flight, the Bahamian justice remanded Bankman-Fried back to jail until his next scheduled hearing on Feb. 8, 2023.

Sam Bankman-Fried, founder of FTX, left, and his mother Barbara Fried at the Magistrate’s Court in Nassau, Bahamas, on Tuesday, Dec. 13, 2022. Bankman-Fried was denied bail by a judge, leaving the disgraced co-founder of crypto giant FTX behind bars.

His parents, Joseph Bankman and Barbara Fried, gave him a parting hug before Bahamian law enforcement moved Bankman-Fried out of the courtroom and away to the notorious HMP Fox Hill prison where, according to Reuters, he’s housed in the medical unit.

Sam Bankman-Fried, founder of FTX, center right, is escorted out of the Magistrate’s Court in Nassau, Bahamas, on Tuesday, Dec. 13, 2022. Bankman-Fried was denied bail by a judge, leaving the disgraced co-founder of crypto giant FTX behind bars.

Bankman-Fried faces criminal charges in the United States, including securities fraud, campaign finance violations, and money laundering, over the implosion of his FTX crypto exchange.

FTX’s collapse was precipitated when reporting by CoinDesk revealed a highly concentrated position in self-issued FTT coins, which Bankman-Fried’s hedge fund Alameda Research used as collateral for billions in crypto loans. Binance, a rival exchange, announced it would sell its stake in FTT, spurring a massive withdrawal in funds. The company froze assets and declared bankruptcy days later. Charges from the SEC and CFTC indicated that FTX had commingled customer funds with Bankman-Fried’s crypto hedge fund, Alameda Research, and that billions in customer deposits had been lost along the way.