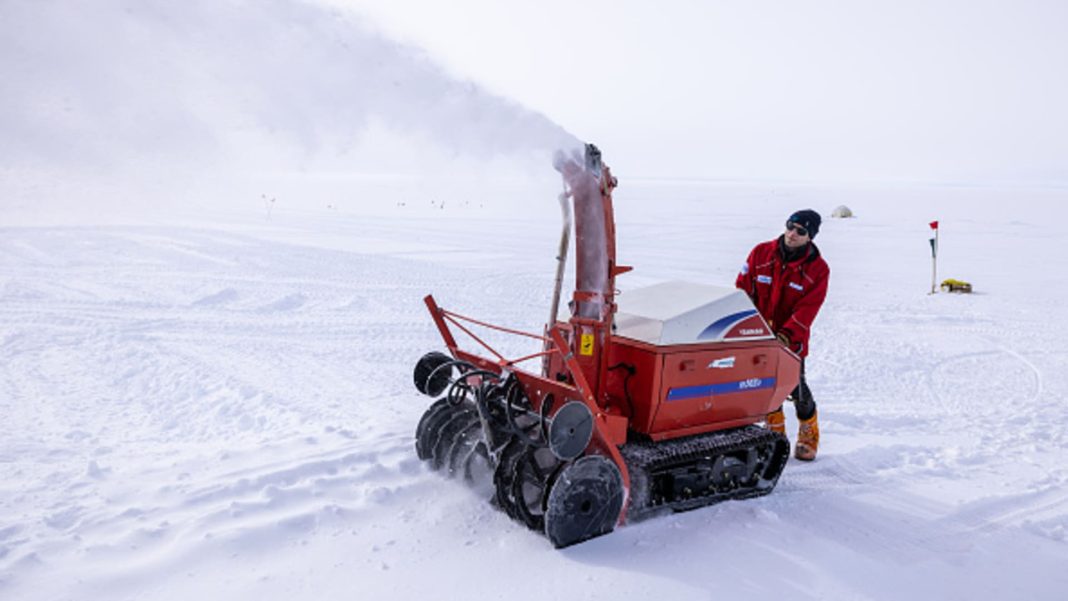 Martin Leonhard of the East Greenland Ice-Core Project (EastGRIP) operates snow blower putting a new snow floor for the winter-storage weather port tent at EastGRIP camp on August 9, 2022. EastGRIP is an international science station on the Greenland ice sheet, the second-largest ice body in the world after the Antarctic ice cap.

The Arctic is becoming wetter and stormier as global climate change puts its vulnerable ecosystems and local communities at risk, scientists said Tuesday in an annual assessment of the region.

The researchers described how hotter air temperatures, melting sea ice, shorter periods of snow cover, increased wildfire and rising levels of precipitation have forced wildlife and Indigenous people in the region to adapt.

2022 was the Arctic’s sixth warmest year on record, continuing a decades-long trend in which Arctic air temperatures have warmed faster than the global average, the report said. The Arctic’s seven warmest years since 1900 have been the last seven years, and researchers pointed to a slew of signs that the region is undergoing a dramatic shift.

For instance, a heat wave in Greenland in September prompted severe ice melt for the first time in more than 40 years, the report said. Climate change has triggered longer summers in Greenland and accelerated the retreat of glaciers.

Scientists also noted that maritime ship traffic is on the rise in the Arctic as sea ice declines, with the most notable increases in traffic occurring among ships traveling from the Pacific Ocean through the Bering Strait and Beaufort Sea.

The rise in ship traffic opens economic opportunities for new trade routes, but also poses potential damage to the ecosystem and Arctic communities. Scientists have predicted that 2035 Arctic sea lanes might be ice-free in the summertime.

Scientists warned that Arctic precipitation is on the rise across all seasons and these seasons are shifting. The changes have disrupted the lives on people, animals and plants that have previously experienced traditionally cold and dry conditions.

The Arctic is warming nearly four times faster than the rest of the Earth, researchers discovered this year, a phenomenon that is raising sea levels across the world. A one-foot rise in global sea levels would have major consequences for coastal communities, as sea level rise threatens to displace almost 200 million people by the end of the century.