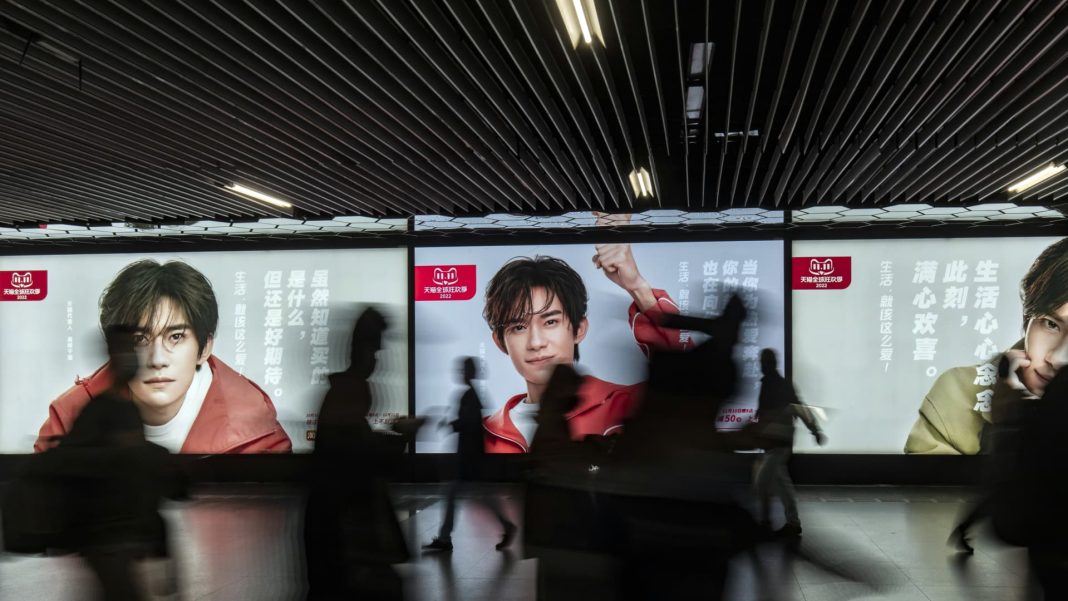 Alibaba broke tradition by not releasing total sales for its Singles’ Day shopping festival this year. Pictured here are advertisements for the festival in a Shanghai subway station on Nov. 10, 2022.

“The resurgence of Covid has affected one area after another, resulting in abnormal or suspended logistic service in different places,” Alibaba CEO Daniel Zhang said during a quarterly earnings call Thursday, according to FactSet. “This hurt merchant operations and consumer logistics experience.”

Disruptions affected nearly 15% of delivery areas in China starting in October and through the 11.11 shopping festival campaign period, he said.

This year, Alibaba declined for the first time to share total gross merchandise value — an industry measure of sales over time — for its flagship Singles Day shopping festival that ended Nov. 11.

The company only said sales were “in line” with last year, which recorded the equivalent of $84.54 billion GMV at the time.

Rival JD.com did not share GMV for its Singles Day promotional period this year, which ran from the evening of Oct. 31 to the end of day on Nov. 11. The company is due to release earnings Friday.

Douyin, China’s version of TikTok, has become a significant platform for online shopping, driven by livestreamers. The video app claimed that from Oct. 31 to Nov. 11, daily average e-commerce sales surged by 156% from a year ago to an undisclosed figure.

China’s ongoing Covid controls have weighed on the overall economy. National retail sales fell in October for the first time since May, official data showed this week. However, the share of physical goods sold online rose to more than a quarter.

In the quarter ended Sept. 30, Alibaba’s Taobao and Tmall online shopping platforms saw GMV fall by the low single-digits from a year ago, CEO Zhang said.

While he noted logistics disruptions through Nov. 11, he said the company was “seeing improvements.”

Last week, China trimmed quarantine times and signaled broader easing in its stringent Covid controls despite a surge in infections across the country, including the capital city of Beijing.

As of Monday, 15.6% of China’s GDP was negatively affected by Covid measures, up from 12.2% a week earlier, according to a model from Nomura’s Chief China Economist Ting Lu.

‘Responsible’ use of cash

Alibaba reported profit in the latest quarter of 12.92 yuan ($1.85) per American Depository Share, excluding items. It beat expectations of 11.62 yuan, according to Reuters estimates. Revenue grew by 3% from a year ago, but missed expectations, Reuters said.

The company also increased its share buyback program by $15 billion, and noted it would not complete a primary listing in Hong Kong by the end of the year, as originally planned.

“The relief in Alibaba today is that it’s not getting worse,” Gil Luria, technology strategist at D.A. Davidson, said Friday on CNBC’s “Squawk Box Asia.”

“As long as the consumer’s not growing, investors want to know their capital is being protected and preserved, and Alibaba did a couple of things along those lines,” he said, noting how the latest results showed “responsible” expenses and use of cash flow.

The stock is about 30% lower for the year so far in both markets.